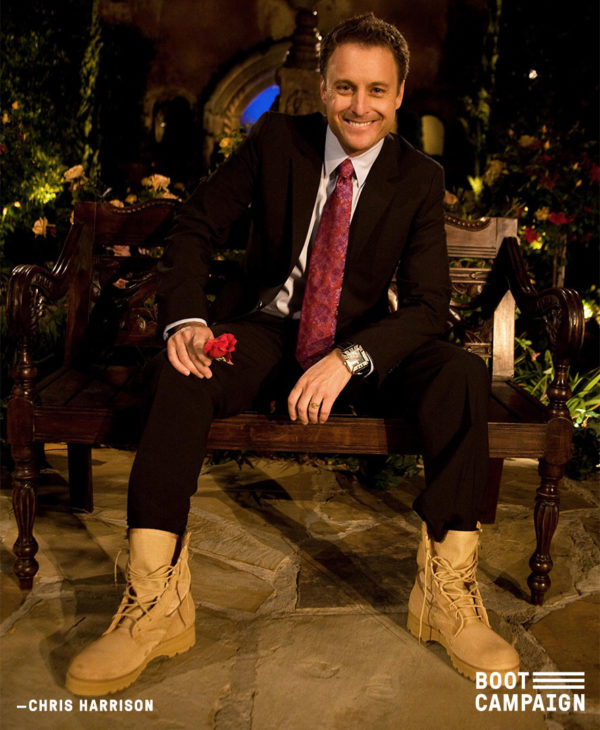 As we celebrate our 10-Year-Anniversary this year, enjoy this throwback blog post from August 9, 2010.

Even before tonight’s premiere episode of the new reality show The Bachelor Pad airs, mystery has shrouded the set. There’s something different today about Chris Harrison as he steps out of the shadows and into the spotlight of the camera.

All 19 returning contestants watch as his eyes lock into the distance and he utters under his breath, “I’ve been waiting for you.” He crosses the room and keeps walking, arms out, as if to make his own final selection, even before anyone has uttered a word or blotted their mascara.  Chris passes the key grip, the powder and the rest of the crew, drawn toward a dimly lit corner of the room. Tenderly, he wraps his arms around his favorite… the chosen one.

Then suddenly turning, Chris exclaims “GET YOUR BOOTS ON!,” revealing his newly-arrived box of custom military boots from Boot Campaign! (Ok, so maybe it didn’t happen exactly that way when Chris first received his boots, but we can dream, right?)

This Texas native, Oklahoma City University grad, husband and father isn’t afraid of a challenge.  But this challenge is easy-breezy: put on a pair of boots in support of our armed forces who have us on their minds every moment of every day. There is no dreaming in this sequence — it’s reality.

Just announced this week, Chris will host the 2011 Miss America Pageant! Not only does Chris have his boots on in support of our military men and women, so do all the contestants from the 2010 Miss America Pageant. Now THAT’S a dream-come-true! 53 drop-dead gorgeous ladies IN THEIR BOOTS from every state being led around by none other than Boot Campaign fan Chris Harrison! What majesty! What pageantry! What a reality!  Will he pronounce those glorious words we all dream he’ll say as he looks, once again, into the spotlight and utters “get YOUR boots on?”

Guess we’ll have to wait until January to find out!