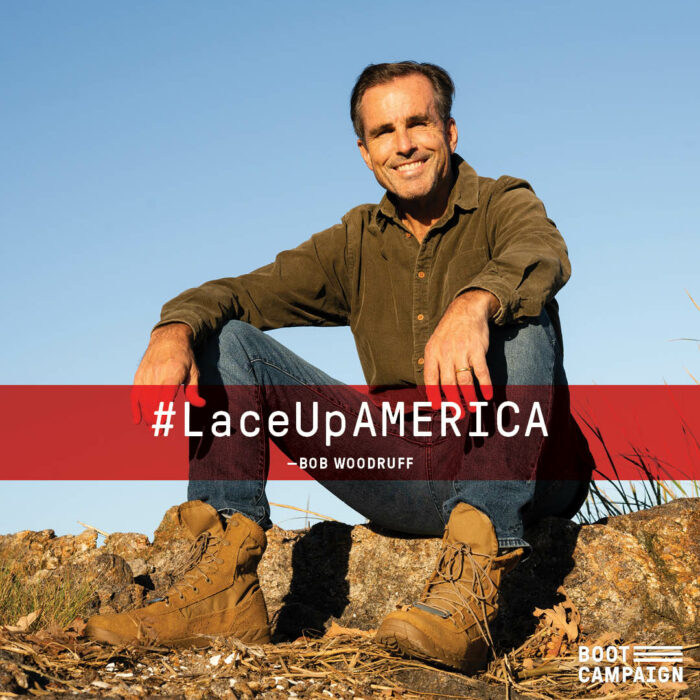 While embedded with the 4th infantry division in Iraq, ABC News journalist Bob Woodruff was critically injured by an improvised explosive device on January 26, 2006. He suffered a traumatic brain injury and spent 36 days in a medically induced coma.

When Bob was transported from Iraq to the Walter Reed National Military Medical Center, his wife, Lee, received a bag of his belongings containing the pair of combat boots Bob was wearing at the time of the explosion that nearly took his life. The boots were stuffed in a plastic bag, caked and dried with blood.

Lee couldn’t — and didn’t — look at the boots for 10 years. She’s written about why saying, “I couldn’t bring myself to look at them. They were a cruel reminder of how our lives had changed, in an instant, with one roadside bomb.”

Since that day in 2006, through Bob’s recovery alongside service members, he and his family have continued to support veterans who have experienced similar injuries.

Recently, we gave Bob a new pair of boots to lace up — ones with new meaning. A pair that shows his dedication to those who wear the American flag to protect and defend our freedoms; two boots that visibly show how he continues to stand with and for our nation’s heroes.

What was it like lacing up combat boots together, in support of raising awareness for veterans issues?

It’s important to remind everyone that our forces want support. If wearing boots gets them more support, then it is an honor.

The U.S. military has been protecting freedom since our country was formed. We forget that until there is a major crisis or war. We need to support our service members at all times.