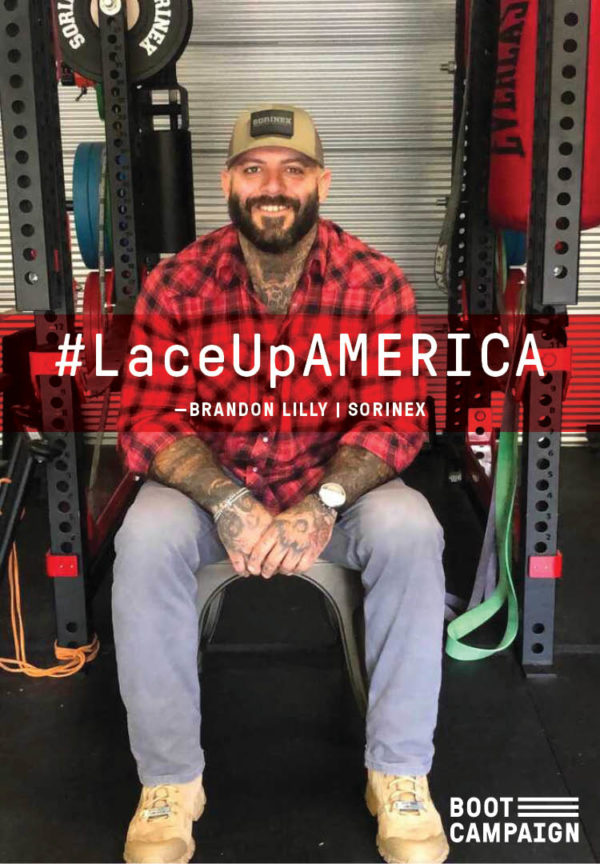 Brandon Lilly’s Duty Is To Serve Those Who Have Served

For Brandon Lilly, supporting those who serve is part of his DNA. He grew up in a military family and always had deep appreciation for this country, its soldiers and veterans. Powerlifting took hold, and Brandon never got to serve in the military. However, his commitment to the service of those that serve has never waned. I caught up with him to learn more about why he’s passionate about our cause at Boot Campaign.

I’m proud of what this country stands for and those who made it that way. At three different points in my life, I’ve had recruiters in my house to talk about a career path for me in the military. The first was when I was 18 years old; the second was three days after the Twin Towers fell on 9/11 and the third was when I was 32. I had never lost sight of enlisting in some form or fashion, but like so many, life was happening in ways that I never got to do it. Unfortunately a career ending injury in powerlifting made a military career impossible, so it’s my duty to serve those who have served. My life is better because I strive to help the guys and gals who would give up their life for my freedom. I don’t take that lightly.

I know what it’s like to be ranked number one on Saturday and to be sidelined and in the operating room on Sunday…when your whole world comes crashing down in an instant. I can relate to veterans coming home injured in a unique way or those that are forced out or retire thinking, “I’m ok with being done”.

I met a veteran, Jonathan, at an event and would have never known that he was battling his military service here at home. He was a bright, shining light, but in the course of our conversation, he opened up about his struggles since separating from the service and the demons and darkness he combats each and every day. The saddest reality for me after meeting so many veterans like Jonathan is that often, one of the toughest parts of war is fought stateside behind closed doors. Veterans are not statistics, and we all need to do a better job is recognizing that these issues are much closer to home and in some cases, in our backyards. Boot Campaign is committed to making sure that those who are asking for help can get it for these serious and severe challenges that can often lead to suicide.

What did lacing up combat boots in support of raising awareness for veterans issues mean to you?

Collectively, as a country, we need to be more aware and take that awareness into action. I implore others to ask the deeper questions and dig in with the veteran community. So many veterans seem healthy and whole because they hide their struggles so well. These people are heroes, and if you can’t admit that, at least concede that they have done heroic things, so others didn’t have to. Veterans are not perfect, or without flaw, but they showed up for us, even if we like to think otherwise.

I’ve had the best days with the best guys turn into the worst nights as they open up and share what torments their mind from military service. It’s going to take all of us to help those who served find a way to navigate life beyond combat.

My grandfather, Robert J. Lilly, was like a poster board for “good” and honorable; he served in the Navy in World War II and Korea. Near the end of his life as he was battling cancer that had ravaged his body, we had a conversation I will never forget. He said, “This piece of land means something. Brothers, good men died to make it mean something more. Make your name mean something because this country means something, and it protects your right to live free.”

I’ve never felt so small as I did talking with him that day. America is amazing and the greatest country in the world. Patriotism to me means fulfilling the obligation to live the life the freedoms paid for in blood, afford me. My life is incredible because of the efforts of all the soldiers that lived through Hell so that we don’t have to.