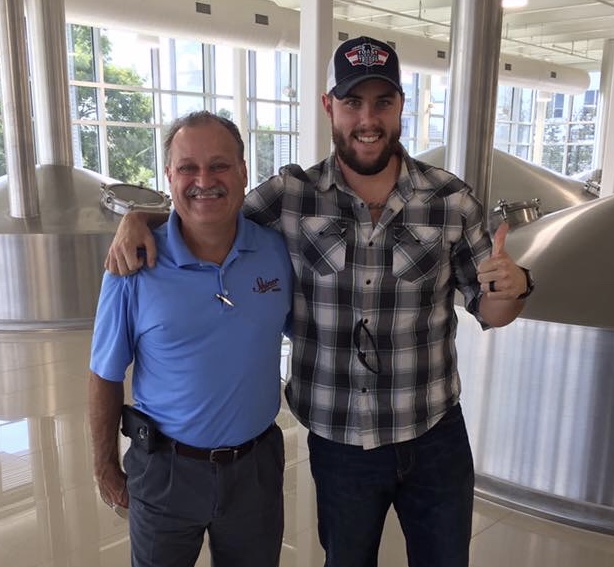 Trevor Lehman, Retail Account Manager of The Gambrinus Company, is charged with expanding Shiner’s footprint in North Texas. Since 2016, Trevor has pursued the Platinum Boot Trophy, which is awarded to the distributor who raises the most funds for Boot Campaign through Shiner’s give-back effort called Toast Our Troops.

With two Platinum Boot Trophies on his shelf that recognize Andrews Distributing of North Texas for garnering the most support for the Boot Campaign mission in 2017 and 2018, Trevor is looking to make a banner hat-trick and bring home the Platinum Boot again to North Texas this year. Here’s why supporting Boot Campaign and the military community means so much to him.

1) How did you first hear about Boot Campaign?

My first introduction to Boot Campaign was at a Shiner Toast Our Troops meeting. Seven years ago, I was working for Fisher59 Distributing in Denton and a Boot Campaign Veteran Ambassador attended one of our meetings to share his story about how Boot Campaign changed his life. I’ll always remember the intensity in the room as he walked us through his injury to healing through Boot Campaign’s program.

2) What is your connection to the military? Do you have any in your family history?

My Grandfather, Joe Madden, is a Korean and Vietnam War Vet. He was an amazing man who lived a long and beautiful life. I also have several friends that have spent time serving.

3) What does it mean to give back to the military community to you?

It feels great to be able to give back! I’m so thankful to work for a company where helping Veterans is encouraged.

4) Shiner and Boot Campaign are both home grown in Texas. What do you think it is about Texas that makes our two organizations thrive?

The obvious answer is because TEXAS is the best! Texas houses so much patriotism, and Shiner drinkers are very loyal to the number one craft brewery in the state. When you combine the brand recognition of Shiner and Boot Campaign’s dedication to enriching the lives of Veterans, it’s a perfect match.

5) Anything else to add?

Well in the spirit of raising as much money as we can for Boot Campaign, I think the best “call to action” is  hurry and purchase the specially marked cases of Toast Our Troops Shiner Beer.

Unimex Goes The Extra "Dollar" to Give Back