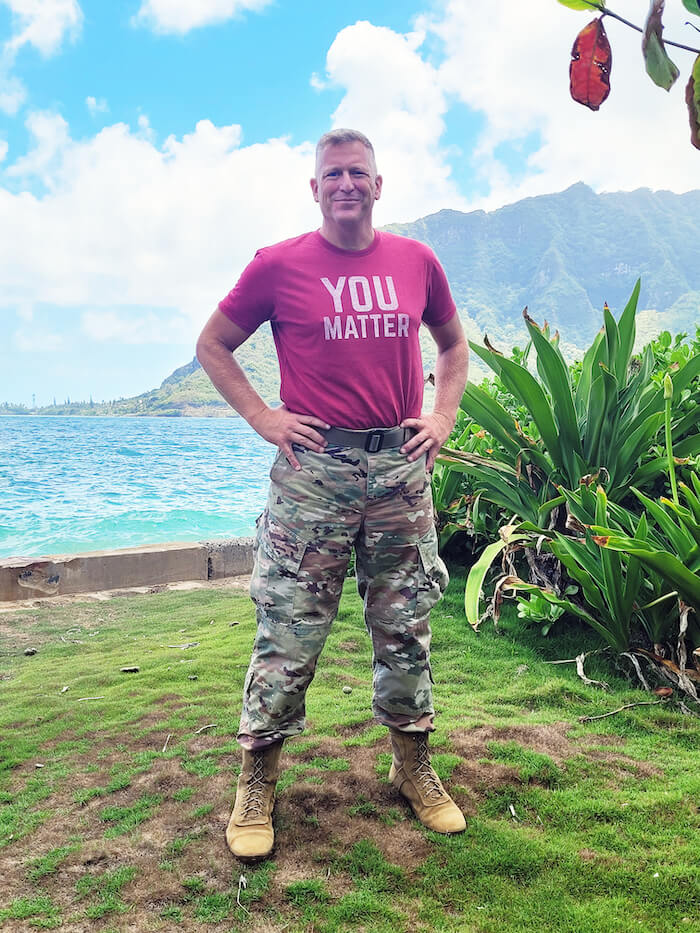 Like father, like son, Charles Causey has the privilege to serve America’s heroes every day as a U.S. military chaplain just as his father did in the 50s and 60s. His years of service included time at the Pentagon serving as a senior army chaplain for the chief of chaplains in Washington, D.C. to Honolulu, Hawaii where he is currently stationed and serving as command chaplain.

An author of seven books, Charles’ newest book is called Candor: The Secret to Succeeding at Tough Conversations and is about the importance of integrity and character in leadership. We were honored to learn more about Candor, his family history of service and what he loves most about our mission in our latest Q&A.

Actually, my father was an active duty Army chaplain and he retired when I was nine years old. I never  thought I would walk in his footsteps, even after obtaining a commission through ROTC in college. My first impulse to join the military was to help pay for my college education. I then became a platoon leader and company commander and traveled around the world. I learned to appreciate and really enjoy the mission and the value of service. After I went to seminary and became a chaplain I decided to  transfer over to the chaplaincy so I could serve both God and my country. I have been on active duty as  a chaplain since 2006 and have loved nearly every minute of it.

Tell us about your new book, Candor: The Secret to Succeeding at Tough Conversations?

Candor was written to help others in their everyday interactions. I have never regretted being open and speaking the truth to others when I ultimately had others’ best interests in mind. I have regretted many instances of cowardice when I lacked candor. The key is the other-centeredness of the engagement.  Here are some other ideas from my new book Candor: The Secret to Succeeding at Tough Conversations.

Candor is a gift to others. It means I will share what is going on in me, not just what I  want you to hear. When you are candid with others you drop the barriers of your life.  When you speak with candor it means you are creating intimacy. People are typically  afraid of intimacy, that is why we lie. Candor reverses this tendency.

For supervisors, it is about having an open ear to those you lead and encouraging  feedback for the good of the organization. Also, it is about having respect for those  around you, valuing others enough to give them honest feedback. A culture of candor  fights against organizational silence and helps teams increase mission effectiveness.

Why do you think having candor is important in working with the military and veteran population?

Honesty is one of the military’s highest values. I’ve had commanders who have told me that I owe them candor, as if it was a debt or obligation I owed to them. Missions rise or fall based on honest  assessments and reports. One could never overestimate how important honesty is to the military. Candor is about being real and true, and there is no greater crucible shaping this than in war with a band of brothers (and sisters).

You lace up your boots every day in service. Does that hold meaning for you and why?

Absolutely. We live in a great nation. It is a privilege to serve and to wear the uniform. I have two sons  who are also in the military and I am so proud of them. I know that my days serving on active duty are  limited so I cherish every one of them.

What about Boot Campaign’s mission is important to you?

Military men and women have many scars, seen and unseen. What I appreciate about Boot Campaign is that it is raising awareness to a non-military audience about the costs associated with service, it validates the work and commitment of our veteran community, and it reminds all of us that the mission doesn’t end when we take the boots off. Those who have served are most likely to understand and  participate in helping other veterans succeed in life.

Whenever we can unite the military community with the non-military community it is a win. I personally think #LiveLacedUp is not only a helpful reminder but a way of life. Veterans entered a life of service when they raised their hands and took the oath, and the desire to serve and give back doesn’t stop when we get out of the service. For non-veterans, with or without boots on they can strive to give back and help their community prosper.

When I hear the word it makes me think of a seminary term patristics which is a study of the church  fathers. Patriotism to me is being devoted not only to the land of my fathers, because some folks did not have parents who are from here, but being devoted to my land of heritage, the place that has given me my roots. It means fostering and cherishing the place/nation that is sustaining you. And this is such an  important topic because many in America begrudge their country. For me, patriotism doesn’t mean  wildly approving every decision my nation has made, but it does mean being respectful and recognizing  that there have been many good men and women who have gone before me to make this country  greater, to defend it, and to build it.

What does the message of YOU MATTER mean to you?

Every person on the planet has immense intrinsic worth and is owed dignity and respect from others, especially those who faithfully serve and sacrifice for their country. That is why I support the You Matter campaign bringing greater awareness for our veterans.