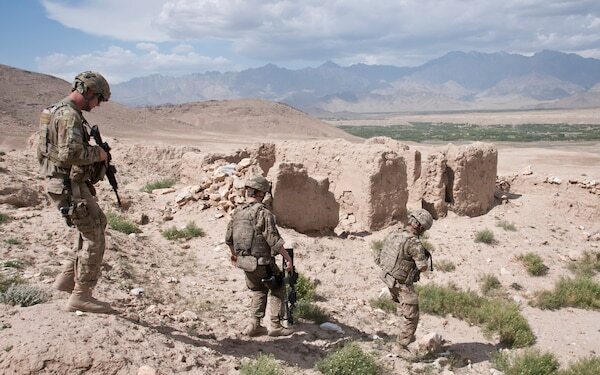 We Stand With Veterans Amidst Heartbreak, Anguish in Afghanistan

Behind the black and white newsprint or digital blue light from a computer screen are the hearts and minds of millions. Millions of veterans who laced up their boots and walked boldly into harm’s way in the Global War on Terror to protect and provide freedom where there was none. There are thousands more who continue to carry out the cause. And behind those active duty troops and veterans are their families; those who hold down the home front while also managing a pit in their stomach, feeling worried, wondered, and even, lost. Because of our presence in Afghanistan the last two decades, thousands of mothers and fathers are grieving their children; husbands and wives have been left widowed, children growing up without their mom or dad. All of their futures are lit by a gold star shining bright.

Over the last two days, veterans who served in Afghanistan have shared some of their very raw, real feelings with me, saying:

“I’m really angry. There was no real plan, only hope that the Afghans could hold the line. Our international credibility has been shot. We never got out all of our interpreters and allowed the situation to delve into chaos. I’m not questioning sacrifices, simply angry at how it ended.”

“Mission creep kept us in Afghanistan and Iraq for far too long and cost us the lives, well-being, and future of far too many. I’m at peace with the fact that we did what we needed to when we were there. I know that most, if not all of my friends that didn’t make it back, did so with a clear conscience, doing what they believed to be the best thing for our country.”

And one publicly shared, “it is more than a strategic failure; it’s personal.”

For twenty years, U.S. forces have had boots on the ground consistently in Afghanistan; some have bled and many have died. Some killed at the hand of the enemy and others by their own, succumbing to a war within once they returned home. And still more struggle with both physical and visible wounds of war and other more silent marks of service that are not seen by the naked eye. All of them voluntarily accepted the inherent hazards of their profession, placing the welfare and security of others before their own.

The mayhem nearly 7,000 miles away from U.S. shores has brought many active duty troops and veterans right back to the front lines. The chaos created has stirred up a whole host of emotions — from unbridled rage to paralyzing sadness, from tremendous guilt to feelings of utter futility, from definite disdain to crippling anxiety about the immediate unknowns to the overwhelming fear for the future.

Now stateside with measurable time and physical distance from the battlefield, veterans are struggling to reconcile that wide range of emotions and remembering those they fought alongside. They are reflecting on the memories that were made; the allies they found in unexpected places and the deep and lasting relationships that were formed in a theatre of war. Some are questioning why they joined the Armed Forces to begin with while others may be longing to lace up their boots once again.

Ultimately, the news is so fresh and the feelings are very raw. One thing all of us at Boot Campaign want veterans to hear: You matter, your service and sacrifice matters and it will not be forgotten, not now and not ever.

I’ve said it before and I’ll say it again:

Freedom is not a concept. It’s a commitment. And for the brave men and women who are serving and have served our great country, their commitment is clear for all to see. Yet for the rest of us — how committed are we to them? How do we show our respect for their service and sacrifice? They need it now more than ever before.

If you are struggling, reach out to those you served with or someone close to you to talk about your feelings. If that is not you, check in and be the friend who lends a listening ear. It is okay to feel these emotions. You Matter. If you need additional support, contact the Veteran Crisis Line 24/7 to speak with a caring, qualified responder right now. Call 800-273-8255 and press 1, chat online at VETERANSCRISISLINE.NET/CHAT or text to 838255.

Cheers to 10 Years of Toasting Our Troops with Shiner