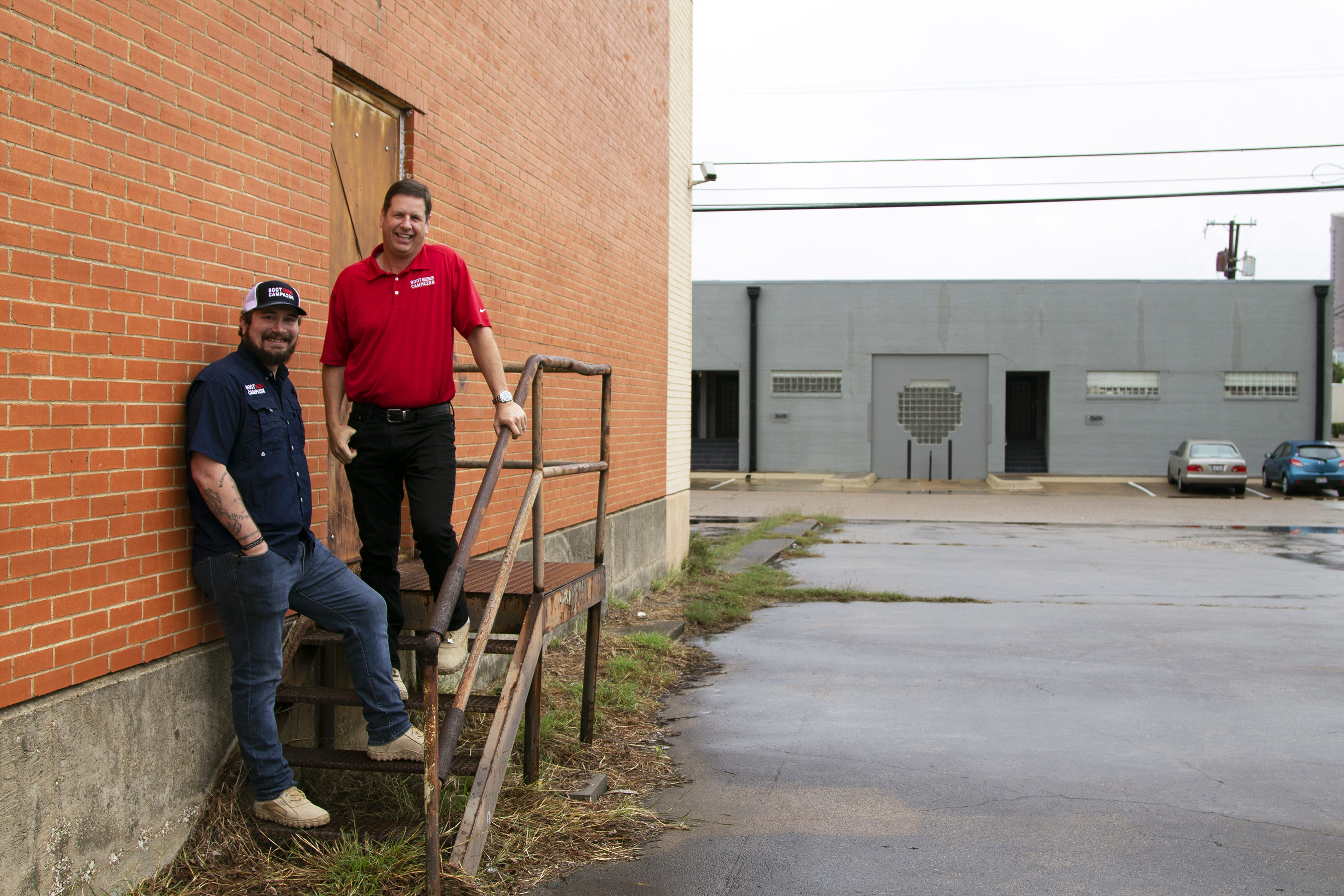 This article originally featured in the November 2018 issue of Homeland magazine and is republished with permission.

U.S. Army Colonel (Ret.) Chris Talcott and U.S. Marine Corps Sergeant (Ret.) Kelsey Smith have both separated from the military but remain in the trenches fighting invisible wounds of war.

“Invisible wounds DO NOT have to be a permanent condition,” Talcott emphasizes. “Don’t be ok with not being ok… seek help. We truly fill the gap between the VA (U.S. Department of Veterans Affairs) and the Department of Defense that may not have known the extent to which some of these veterans were injured before they left the service.”

According to a 2016 survey of post 9/11 veterans conducted by the George W. Bush Institute’s Military Service Initiative, less than 50 percent of military personnel and veterans who experience invisible wounds receive care, compared to 83 percent who have visible injuries. The survey also found that a staggering 80 percent or more of warriors surveyed believe that the significant barriers to veterans seeking care for invisible wounds is based on societal stigmas such as: embarrassment or shame, belief that their family will not understand, and belief that seeking care will result in negative repercussions in the workplace.

Talcott and Smith are working to improve those percentages one veteran at a time through Boot Campaign’s Health and Wellness program. Focused on the “big five” invisible wounds – traumatic brain injury (TBI), post-traumatic stress disorder (PTSD), chronic pain, self-medication and insomnia – the program gets veterans access and funding to individualized and comprehensive treatment and training programs.

“Boot Campaign’s values, mission and goals certainly align with my dream job to continue to serve our nation and its veterans and service members and tell their story to our communities,” reveals Talcott. “It’s an opportunity to truly make an impact with veterans struggling with invisible wounds. I love our small team of focused and dedicated patriots who are working extremely hard to make a difference in this crowded space of veteran non-profits across the nation.”

During his 24-year career in the Army, Talcott developed a true understanding of both psychological and on-the-ground aspects of military service. He garnered 26 military awards, including the Legion of Merit, two Bronze Star and six Meritorious Service Medal awards. However, perhaps his most profound take-away from the Army was a deep regard for human life and a desire to help others achieve.

After rising to the rank of Colonel, Talcott turned his focus to empowering others through military science education. Intrigued by military psychology and driven by the desire to create great future leaders, he changed his trajectory to instruct at the U.S. Military Academy at West Point from 2001-04. After that he taught at UCLA and then Texas Christian University in Ft. Worth, Texas. There he closed his military career leading more than 300 cadets in the ROTC programs at TCU, Baylor University and the University of North Texas.

“It was an honor and a blessing to be in the Armed Forces serving for more than 20 years with the finest men and women warriors from the greatest nation on earth,” confides Talcott, who was born into a military family with two grandfathers serving in World War II. “I considered it a calling as opposed to a job. It was a blessed career and I accomplished more than I ever dreamed or was worthy of.”

When Talcott retired from the Army in 2014, he looked forward to sharing important time in Argyle, Texas, with his wife and three kids who were finishing up high school and preparing for college. He also remained committed to his military brothers and sisters.

As deputy director for the Brain Performance Institute in Dallas, part of the UT-Dallas Center for BrainHealth, he was responsible for the organization’s strategic planning and operations at the $34 million facility. While the building offered programs for all people, one initiative especially resonated with him and the organization’s scientists and researchers: brain training for our military – active duty, reserves, retired, injured and even healthy veterans.

At the institute Talcott worked alongside Boot Campaign CEO Shelly Kirkland who, at the time, was the Center for BrainHealth’s director of public relations. He also met Boot Campaign’s former Interim CEO Morgan Luttrell, the twin brother of fellow Navy SEAL Marcus Luttrell.

It was Marcus’ best-selling book Lone Survivor that inspired five Texas women to create Boot Campaign in 2009, and Morgan’s pursuit of a cognitive neuroscience graduate degree in 2016 that inspired Boot Campaign’s flagship health and wellness program.

When Kirkland took the Boot Campaign reigns as the CEO in 2017, she invited Talcott to join her as COO, an opportunity he’s been hoping for since retiring from the military — to be in a position to help veterans disregard the stigmas and stereotypes of invisible wounds and get the assistance they need and deserve from a grateful nation.

Like Talcott, Smith also hails from a family of public servants. The Nevada, Mo., native followed in the footsteps of two grandfathers, multiple uncles and an older brother who served in the military when he enlisted in the Marine Corps in 2003.

“I think service was the honorable thing expected within my family, whether that be in the military or other civil service, but September 11th was a defining moment for me,” explains Smith. “My dad was a firefighter and my mother a paramedic turned nurse at the time of the terror attacks. I remember seeing my dad’s fire department coming in for the local memorial service after 9/11 and seeing them emotionally distraught wearing their mourning badges. That was a driving factor in my determination to serve.”

During his 10-year military career, Smith deployed to Iraq four times and spent a total of 28 months in country in support of Operation Iraqi Freedom. He was awarded a Purple Heart for activities associated with his deployment to Ramadi, Iraq in 2005 with the 3rd Battalion, 7th Marines Regiment. The infantry rifleman and combat instructor also received two Navy and Marine Corps Commendation medals, a Navy and Marine Corps Achievement medal and the Combat Action ribbon.

A current resident of Fort Worth, Texas, Smith started as a Boot Campaign volunteer after medically retiring from the Marines in June 2013.

“I fully embraced the Boot Campaign mission the first time I heard it,” remembers Smith. “I loved representing and spreading the word of what Boot Campaign was up to and getting others to support us, so that was a pretty natural fit.

“I look at this Boot Campaign opportunity as a continuation of my service,” he adds. “I spent years of my life keeping my fellow Marines alive and training others how to keep theirs going. I can’t do that anymore, but I can do that for my new peer group of veterans. Being able to contribute to the mission with this great team and help my fellow brothers and sisters in arms is an incredibly rewarding career.”

As program manager at Boot Campaign, Smith says his most important role is working directly with veterans.

“I conduct initial screening and vetting of applicants and explain the program and next steps,” clarifies Smith, who completed his bachelor’s degree in human resources and organizational behavior from the University of North Texas in 2016. “I think it’s really great being that first touch-point for the guys and gals who need what we’re offering, especially hearing the excitement in their voices after learning all about it.”

To date, Boot Campaign has raised more than $19 million and is giving more than $2 million annually to help service members, veterans and their families from every generation. Of the more than 45,000 Veteran Service Organizations (VSOs) currently registered with the IRS, only four percent work within the Health category and less than one percent gift or grant more than $1 million to those who have served. Boot Campaign is able to do both, thanks in part to the efforts and commitment of veterans like Talcott and Smith.

“Chris and Kelsey are completely committed to helping fellow veterans,” says Kirkland. “It’s more than a job to them, it’s a personal mission to help make sure veterans and military families are getting what they need and, at the same time, figuring out how we, as an organization, can do better for them.

“I’ve worked with Chris for more than three years prior to becoming Boot Campaign’s CEO,” she adds. “As a former Army Colonel, he is an insightful strategist with a servant heart. I feel so fortunate to have both Chris and Kelsey on our team.”

17 Years Later the War in Afghanistan Rages On: What Veterans Have to Say About It