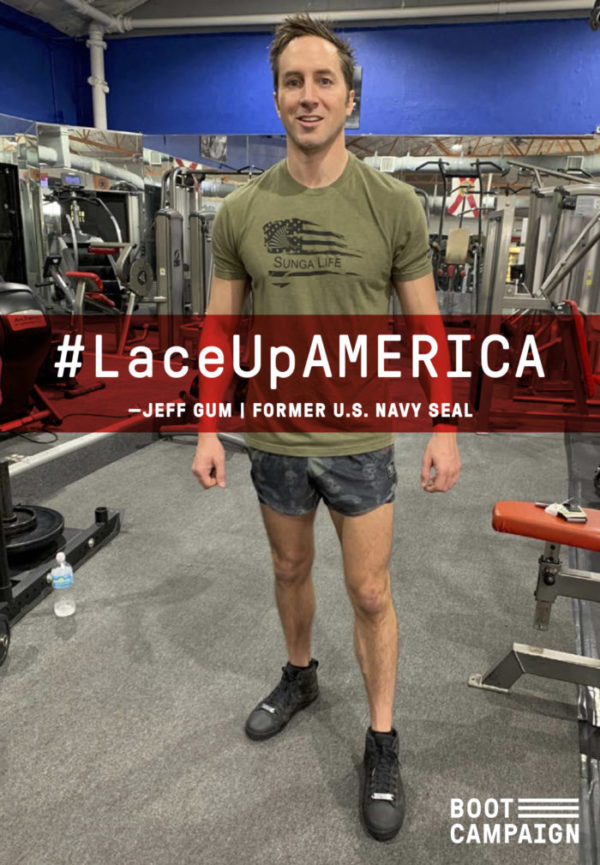 Jeff Gum never backs away from a challenge. It’s why he joined the Navy, graduated from BUD/S and earned his Trident as a Navy SEAL. Since separating from the service, he’s continued to leverage that mindset to serve out of uniform in the civilian world and create a company that continues to give back to veterans and military families.

I was a senior in high school when 9/11 happened…and I didn’t want it to happen again so I joined the Navy. It was once said, “The only thing necessary for the triumph of evil is for good men to do nothing,” so I had to do something.

What Boot Campaign does really hits home; in the military, our mission is to protect and serve. When those who have worn a uniform to protect and serve in our Armed Forces come home with PTS and brain injury, they’ve sometimes lost the only mission they’ve ever known. You can’t have your memories be bigger than your dreams because it sets the foundation for everything else in life. Boot Campaign can help veterans rediscover their purpose and their personal mission.

Meaning in a man’s life is everything…since leaving the military, I’ve been able to combine forces with new and old friends, veteran and civilian, to continue my service in a new way, operating as a team to serve others and myself at the same time.

Our country gives the freedom to be and do whatever you want; to me, patriotism means being a shining light of red, white and blue to take advantage of all America has to offer.

Brandon Lilly's Duty Is To Serve Those Who Have Served