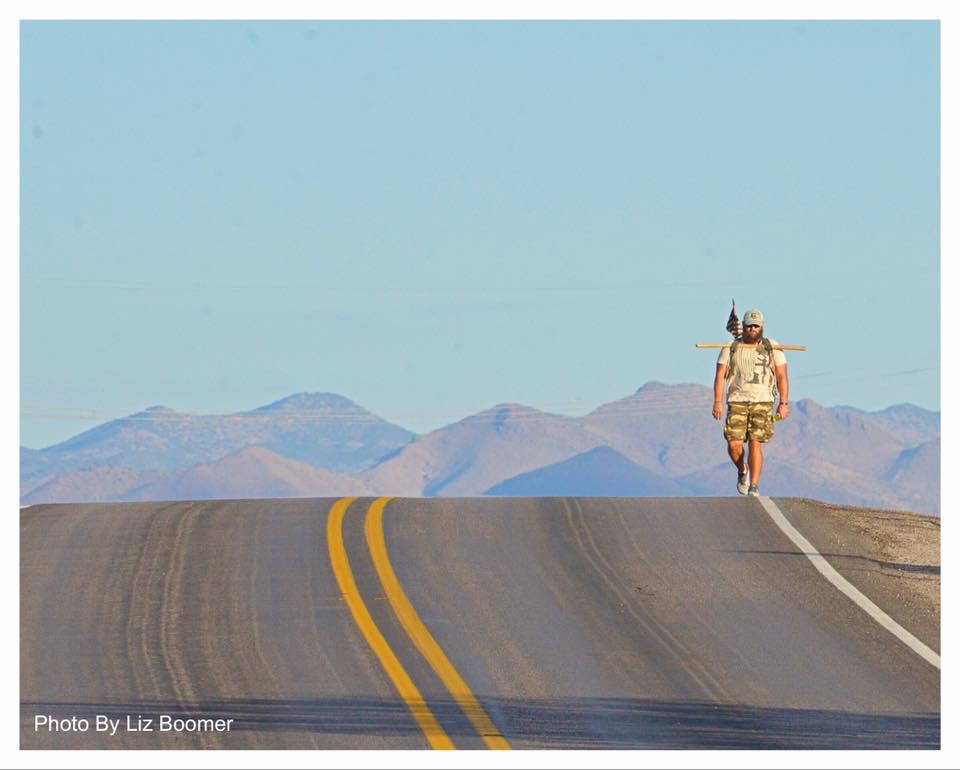 MARINE LARRY HINKLE TALKS THE TALK AND WALKS THE WALK IN SUPPORT OF U.S. MILITARY VETERANS

For most Americans the month of May ends with a holiday weekend that is designated to remember and honor the brave men and women who have proudly and selflessly served and died during active duty in the U.S. Armed Forces.

For Sgt. Larry Hinkle, a life-long Texan and veteran of the United States Marine Corps, that designated holiday on the U.S. calendar is not nearly enough recognition for those who gave the ultimate sacrifice in defense of our freedom.

“Every day should be Memorial Day in this country,” declares Hinkle, the grandson of a flight navigator of B-25 bombers in World War II.  “Our country is rich in heroes, and we should honor those heroes daily, and we should remember their names and say their names daily.

“To a lot of us who have served it is that way every day, but the fact that we have one day to celebrate them as a country is still a good thing to bring light to,” continues Hinkle.  “Understanding that somebody laced up to simply protect strangers, and they gave up everything to do that… it’s just amazing. You can’t put into words what kind of character those men and women possessed.”

For Hinkle, who grew up in the small town of Joshua, Texas, he admits he was not always aware of what the Memorial Day “holiday” stood for.  However, after his fledgling baseball career at North Central Texas College came to an end due to a shoulder injury, he enlisted at a Marine recruiting station in North Richland Hills near Dallas on Jan. 11, 2000, and his opinion of the “holiday” was forever magnified.

“In all honesty, before I enlisted in the Marine Corps, it was just a day off work,” Hinkle confides.  “I was young and probably knew no better. Even though my grandfather was a veteran, I never knew the significance of it until I enlisted and realized the legacy that is left for us to maintain for these people who have paid the ultimate sacrifice.  That’s an honorable thing to shoulder.”

While Hinkle admits he did not appropriately recognize the importance of Memorial Day in his youth, he says he clearly understood the significance of serving in the military thanks to the example set by his grandfather, U.S. Air Force Lt. Col. Dale Chalfant.  A flight navigator on several World War II missions, Chalfant survived the Japanese attack at Pearl Harbor on Dec. 7, 1941, because he was fortuitously recovering in a local hospital from a broken leg.

“My grandfather was in the Air Force in World War II, so I kind of had a military history in the family and that’s obviously one of the determining factors for me joining the military after I got hurt playing baseball,” reflects Hinkle, whose sister Leisa (Parker) also served four years in the U.S. Navy.  “Unfortunately, I didn’t get to meet him because he died 20 years before I was born. But he was a religious man and definitely attributes all that [Pearl Harbor experience] to God. My whole family does.”

After enlisting, Hinkle received orders to Camp Pendleton, Calif., where he was attached to 3rd AABN (3rd Amphibian Assault Battalion) and became specialized as a crew chief for amphibious assault vehicles (AAV).  He deployed three times in his career, including the end of 2000 when he was assigned to a security detail for the U.S.S. Cole hours after it was bombed in the Gulf of Aiden, near Yemen.

On his second deployment in 2001 he was part of the Amphibious Ready Group that provided an immediate support presence for “Operation Anaconda” after the September 11 terrorist attacks. His final deployment was to Iraq in 2003 in support of Fox 25 (2nd Battalion, 5th Marines), for the initial invasion.

“We were in Saddam City on the outskirts of Baghdad, and we were taking fire and the scout team ended up taking a wrong turn, so we had a big logistics nightmare for tanks and AAVs,” recalls Hinkle as if it was yesterday. “The next thing I know I woke up on the bottom of the turret and a big explosion went off.  Our company First Sergeant Edward Smith was hit in the head and ended up passing away three days later. He was the epitome of the Marine’s Marine.”

Ever since that date of April 3, 2003, losing 1st Sgt. Smith has been top of mind for Hinkle, who finished active duty in 2004 and his ready reserve tenure in 2008.  Although he works in the commercial construction industry as a civilian, Hinkle now spends a considerable amount of time and effort raising awareness and giving back to veterans.

Not only does Hinkle talk the talk in support of the military community, he literally and figuratively walks the walk.  In fact, he burned through 27 pairs of Brooks running shoes in just three walks to prove it.

In 2015, Hinkle started training as a distance walker to raise awareness for veterans.  He has since teamed up with various nonprofits and walked more than 5,200 miles throughout the U.S., while also getting face to face with veterans and first responders in VA hospitals and outpatient clinics, veteran state nursing homes, fire/police/sheriff departments and Salvation Army locations along the way.

Hinkle always starts a major walk on or around April 3 in honor of 1st Sgt. Smith, and his first excursion was no easy layup.  In 2016, Hinkle traveled 2,640 miles one step at a time from Camp Lejeune, N.C. to Camp Pendleton, Calif., and it took 16 pairs of shoes.  In his second walk of 1,600 miles through every major city in Texas in 2017, he needed six pair of shoes. On his third walk in 2018, where he joined teams from the U.S. and United Kingdom in a 1,000-mile expedition throughout America, he needed five pair of shoes to complete the journey.

While raising awareness, his efforts also have afforded him the opportunity to pass out more than 600 gift cards to veterans, in addition to providing food to more than 3,000 of these heroes along his travels in a program he calls #FeedEmFriday.

“I get goose bumps just talking about it, but you’d be amazed by what buying a veteran a simple lunch will do for their day,” reports Hinkle, a life-long Chicago Cubs fan who enjoys tournament bass fishing in his spare time.

Nowadays, Hinkle’s message to everyone he meets includes a shout out to Boot Campaign, the Texas-based military non-profit he recently joined as a Veteran Ambassador.  He was introduced to Boot Campaign through “one of my best friends in the Marine Corps” David Hardin, who kept telling him about the organization’s revolutionary health and wellness program that focuses on traumatic brain injury, post-traumatic stress disorder, chronic pain, self-medication and insomnia.

“While on my international walk with the Brits last year, (Boot Campaign CEO) Shelly Kirkland came out and met us in Houston, and then met up with us again in Colorado and at the finale in New York,” recalls Hinkle.  “Morgan Luttrell also came out as well. Seeing their dedication and their heart was impressive. There was this presence of a family feeling, and I knew I had to be a part of it. Now I am a Veteran Ambassador for Boot Campaign and extremely humbled and thankful to be that.”

Hinkle also enrolled in Boot Campaign’s health and wellness program himself, and experienced life-changing assistance that he is eager to raise awareness and funds for to afford more veterans the same experience he has undergone. To do just that, in 2019, he joined fellow Boot Campaign paralyzed Veteran Ambassador Ricky Raley on his 1,200-mile hand cycle journey from Dallas, Texas to Fort Pierce, Fla.

“We just recently had three veterans kill themselves in the same week while in the waiting rooms of VA hospitals, just shoot themselves, and we’ve desperately got to change that,” says Hinkle.

“If I could convey one thing to veterans who are struggling, it would be that getting help with your mental health is not a weakness,” he adds.  “Focusing on my mental health has made me a better person and made me stronger, and it can work for you, too.

“Surround yourself with the people who understand where you’re coming from and what you are going through mentally is very important.  That’s where you’re going to find your biggest and best support system. You need to know you are not fighting this thing alone. It’s a collaborative effort. There’s always hope, just don’t give up.”

Learn more about Boot Campaign and its health and wellness program at www.BootCampaign.org.

Why We Need To Live Laced Up