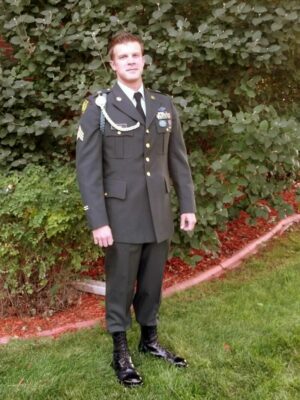 Iraq to Instagram: How One Friendship Led to Life-Changing Care

Unbeknownst to him, a meeting on foreign soil in Iraq in 2006 was just the beginning of Shaun’s journey with Boot Campaign. After serving in the National Guard for 15 years, enduring two deployments overseas — one to Germany in 2002 in support of Operation Enduring Freedom and a combat deployment in 2005-2006 to Iraq, Shaun returned home.

With a drive to continue to serve his country, Shaun completed Airborne School and broke his back during a training mission in 2011.

“When I was a soldier, I put so much effort and time in being the best soldier I could be but getting out of the service with the injuries I sustained was hard,” said Shaun. “I would come home from work, lie on the ground because I was in so much pain and self-medicate with alcohol to get some sort of relief.  For years I tried a lot of different ways to get help — different medications, group counseling, rehab and yoga. Some were helpful, but I always felt like just another number.”

That’s when an Instagram post about Boot Campaign boots by a fellow veteran Shaun met overseas more than 15 years ago led him to help.

“As a father, I should be, and I am, willing to put that same type of effort in being a good dad, and member of society. I would like to be something other than a combat infantryman for my country. I know I can be, but I’m not certain how to get there at this point.”

“Having been on 13 prescriptions at one point and attempting suicide, I knew I was approaching another low,” said Shaun. “As soon as I reached out to Boot Campaign, I felt taken care of; every interaction has been about me, individually. It’s not about someone else’s experience or their wounds of war. With Boot Campaign, everything has been tailored to me and made accessible.”

“It’s hard to put my finger on one thing about how Boot Campaign has helped me and my son. From the very beginning, their entire team has invested in me as a person, has genuinely cared about my well-being and expressed true interest in my life and my son’s life. It’s not just words…Boot Campaign has truly changed our lives; I have a sense of purpose again and am making plans for the future. I’m forever indebted and owe Boot Campaign so much.”