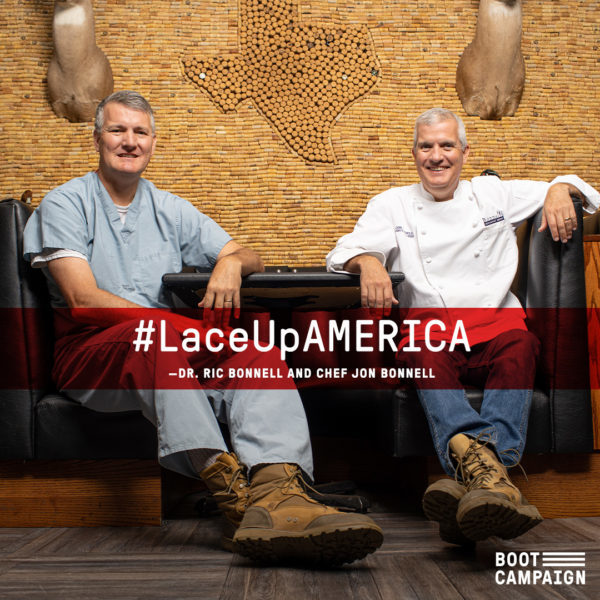 Two Brothers, A Family Ranch and A Wild Idea

Picture this: An expansive family ranch decked out with all the normal things like cattle, a barn or two, roaming pastures and a 100 year old beautiful lodge style ranch house with the throwback feel of a bygone era.  And on one day each year the ranch grows with some additional and not so typical elements of ranching like catfish pools, frog-filled ponds, a bowling ball cannon, clay shooting, target golf, flame-throwing stations and other kinds of shenanigans that are so crazy fun veterans and patriots alike have a good ‘ole time on a hot Saturday afternoon in June.

For the last seven years what you just envisioned in your mind has come to life on an even bigger scale thanks to two Texas brothers, Jon and Ric Bonnell. Jon, a well-known chef and restaurant owner, and Ric, a well-respected pediatric emergency physician let their imaginations run wild. The brothers and a good friend, Dan Roberts, created the Redneck Triathlon with the intent of having fun, getting dirty and raising money for a good cause to help meet the needs of deserving veterans. Each year continues to bring new traditions and great memories, including this year’s mini tanker paintball obstacle course and a torrential downpour just as the day wound down.

We went back and asked Jon and Ric a few questions as to why they lace up their boots year after year to give back to military families and how Boot Campaign became their charity partner.

1) How did you first hear about Boot Campaign?

Jon: Randy Cupp invited me to a fundraiser that supported Boot Campaign in the past and introduced me to some of the folks at Boot Campaign. It was an easy choice from there.

Ric: We came up with the concept of Redneck Triathlon, along with our co-founder, Dan Roberts, without having a specific charity in mind. Jon ran it by Chris Kyle who recommended Boot Campaign as doing the best job for veterans.

2) What does it mean to give back to the military community to you?

Jon: We just cannot say “Thank You” enough to those willing to put their lives on the line every day to ensure our freedom.

Ric: I have always felt guilty that I didn’t serve in the military. I think many civilians feel the same way and don’t know what they can do to truly show their appreciation for the sacrifices that service members and their families make.  I am inspired every time I interact with veterans and it makes me want to do more in my civilian life to help others.

3) What is your connection to the military? Do you have any in your family history?

Jon & Ric: Our father was in the Army during Vietnam and our Grandfather flew in WWII. We have many friends who have proudly served and many who continue to do so.

4) What are some of your favorite memories from the Redneck Triathlon fundraiser and which one do you wish you could forget?

Jon: There are many unforgettable moments we’ve all experienced over the course of these many years but the one I know I will never forget happened at this year’s event. A torrential downpour began just as we were all getting settled together for dinner. My restaurant Waters caters the event, and one of my cooks was outside the tent trying to fry catfish in the rain. When he sent a huge pan of catfish inside to the buffet, a massive blast of wind hit the tray and launched it into the air. I watched as suddenly it was raining catfish inside the tent pelting one one of our gracious volunteers. Though a  comical individual in the buffet line said, “well, I guess we aren’t getting a refill on fish for a while”, I was grateful everyone was safe and even more so proud of how that volunteer handled such a shockingly unexpected encounter with catfish. It’s not really something you can plan for or want to have happen but in the end, I’ll take several of those kinds of “event malfunctions” if it means watching veterans get completely into the spirit of the event. It makes my day every time. The opportunity to truly say “thank you” in a meaningful way and help support those who need help is what motivates us to keep this event going every year.

Ric: I second that. Watching veterans laugh and just have fun is the most rewarding. I love seeing them jump in the water and noodle a 10-pound catfish with their bare hands, put an 8-foot python around their body or even fish and catch their first bass.

Similar to Jon, I wish that I could forget the thunderstorms that turned the whole ranch into a mudhole. We survived, but ensuring everyone’s safety was our first priority, and it became pretty stressful there for a bit as we considered our options. The rain finally let up which provided a happy and safe ending to the event.

5) What does the Boot Campaign partnership mean to you?

Jon & Ric: We are confident that our fundraising and veteran activities are actually effective because of the leadership provided by Boot Campaign. We get unsolicited feedback from many veterans about the difference that Boot Campaign has made in their lives and especially for their families. We can’t wait until next year’s Redneck Triathlon!