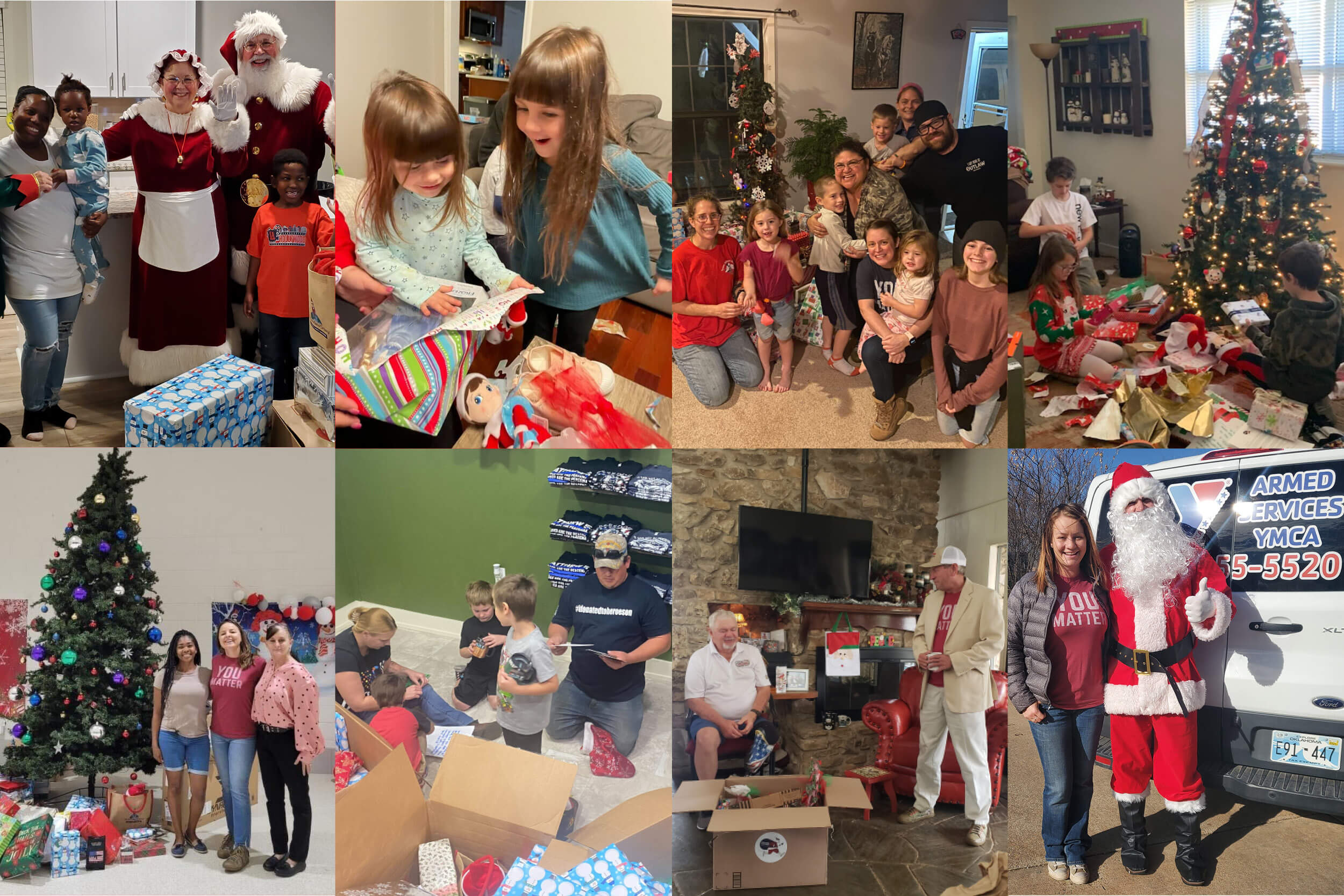 For the seventh consecutive year, Boot Campaign spread extra holiday cheer to veteran and active duty military families nationwide through our Santa Boots program, and we are pleased to share it was our most impactful and successful year yet!

It was an added treat to kick off our week-long volunteer efforts in Grapevine, Texas with the national morning show, Fox & Friends! Fox contributor, U.S. Marine Corps veteran and Boot Campaign Board Member, Johnny Joey Jones was joined by guests U.S. Army veteran Mat Best of Black Rifle Coffee Company, Board Member Ric Bonnell and brother, Dallas Chef Jon Bonnell and Santa Claus, himself, to talk about our Santa Boots program and give a sneak peek into the action happening at North Pole, South.

Thanks to the generous support of Americans across the country, patriotic partners and hardworking volunteers, Boot Campaign wrapped, packed, and hand-delivered more than 240 packages to deserving military families nationwide! 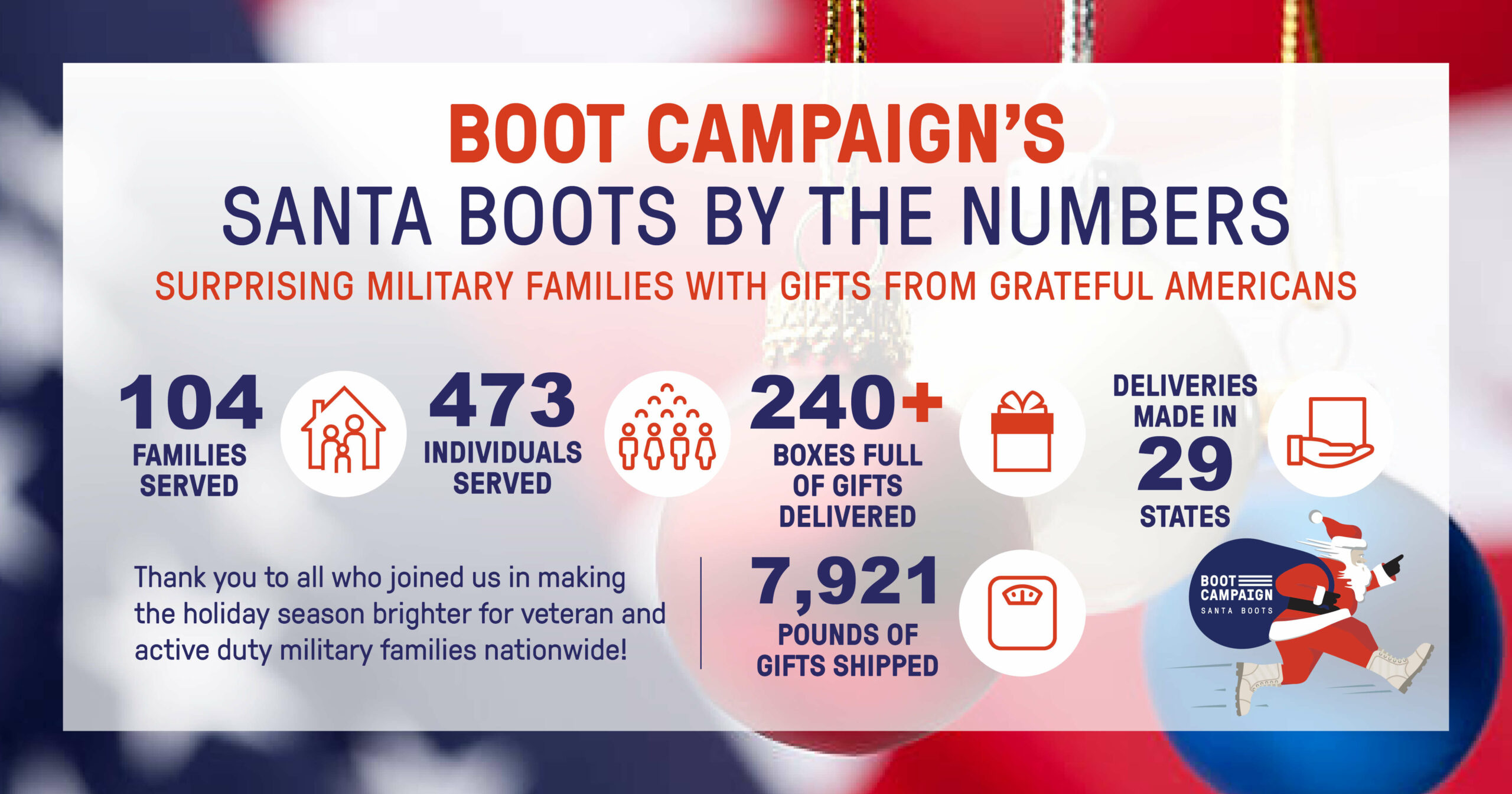 Here’s what Boot Campaign’s holiday gifts mean to some of the families and volunteers in 2021:

“We received the most incredible surprise package today. Thank you all who made it possible. It came at the perfect time and our family was absolutely blown away. This is the greatest gift we have ever received and we are truly humbled by the thought and care that went into this package of Christmas blessings for our family. I was blown away with how personalized and perfect they each were. I cannot thank you all enough. We are truly speechless and oh so grateful. Merry Christmas to you all!!” – Spouse of U.S. Army Veteran, North Carolina

“WOW! I was absolutely speechless when I received your delivery of Christmas packages for our family! There are no words to express our gratitude! The thoughtfulness and encouragement brought us so much hope at a very rough time! It is so amazing to know that we matter!” – Spouse of U.S. Army Veteran, Louisiana

“I just do not know where to begin to state my appreciation for the wonderful gifts and certainly, the message of “You Matter” means so much, I never expected such thoughtfulness.” – U.S. Army Veteran, Texas

“An active duty Army Veteran, who was simply happy to be home for Christmas, was emotional as our team of Boot Campaign elves arrived. He had recently returned home from Afghanistan where he was at the Kabul airport on August 26 during the attack. Dad was so emotional he had to leave the room for a few minutes. They were so grateful, emotional and shocked. Both sets of grandparents also joined us via FaceTime and mom’s parents (who are also active duty) were just in awe, saying that they’d heard about holiday programs for military families but they’d never seen anything so personal like this.” – Santa Boots Delivery Volunteer

“The family we went and saw today was so thankful and kind. They deserved those presents so much. The family had 4 kids, and two with very complex health issues. Just brought me to tears how thankful and deserving they were of those presents. You changed their lives. That’s what Christmas is truly about, and I wish everyone knew what a difference they could make for people by giving.” – Santa Boots Delivery Volunteer

To all those who supported our Santa Boots program, thank you! As we look forward, we are focused on one thing: Letting veterans know year round that their service, their sacrifice and their lives matter. We ask for your continued support by making a donation, sharing our efforts on social media or lacing up a pair of combat boots to outwardly express your gratitude for those that serve.