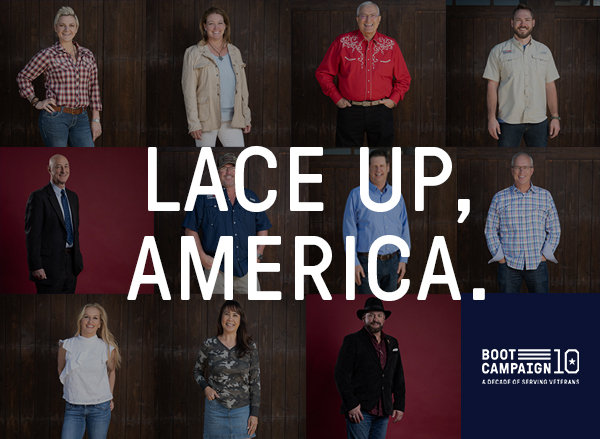 Meet Our 2019 Board of Directors

Boot Campaign’s 10-Year-Anniversary is an amazing milestone for many reasons. But here are a few key ones:

As we embark on the next 10 years of our organization, I am proud to announce incredible, strategic and thoughtful additions to our governing Board of Directors.

Four of these remarkable veterans laced up their boots for more than 20 years. All seven of them are civil servants, some donning a uniform to protect our freedom collectively for more than a century while also supporting military and veteran families simultaneously.

When Boot Campaign was founded by five Texas women who wanted to blaze a trail of patriotism across all 50 states, their mission was solely awareness: To bring stories of service and sacrifice to all Americans and to show support for both active duty troops and our veterans. Ten years ago, that was a noble mission. But, as the philanthropic climate transformed, so did the needs of military families and veterans. In response to the changing landscape and donors growing sophistication with when, how and why they give, Boot Campaign changed too.

We are now part of the 1% club. We are one of the 460 veteran service organizations (there are over 46,000 in this space) in the U.S. who give more than $1,000,000 in support of military families and provide life-improving programs aimed at invisible wounds of war. Sadly, with the dramatic rise in suicide among young military veterans and continuation of the longest war to date, more and more young men and women;  Soldiers, Sailors, Airmen, Marines, Coast Guardsmen, Reservists and National Guardsman, will return from service needing our help to fully come home.

I encourage you to learn more about each of our new board members. Discover why they’ve laced up (this time as a civilian for some) with Boot Campaign.  Understand their stories of service and sacrifice that inspired them to engage in our mission to ignite the inner patriot in all Americans, restore the health and wellness of military families, and make Christmas meaningful for those who serve us all.

The last 10 years have been remarkable, and there is much more work to be done.

It is my honor to lace up my boots with this group. We as a staff are eager to walk alongside them to shape the future, not only for Boot Campaign, but to make significant progress ensuring each member of the military community knows they are loved, supported, and we are here to provide the life-improving programs they need. We are committed to doing this through our programs and through partnerships and collaboration with others. Together we can do more, so lace up, America! Get your boots on!

2018 Was a Year of Determination