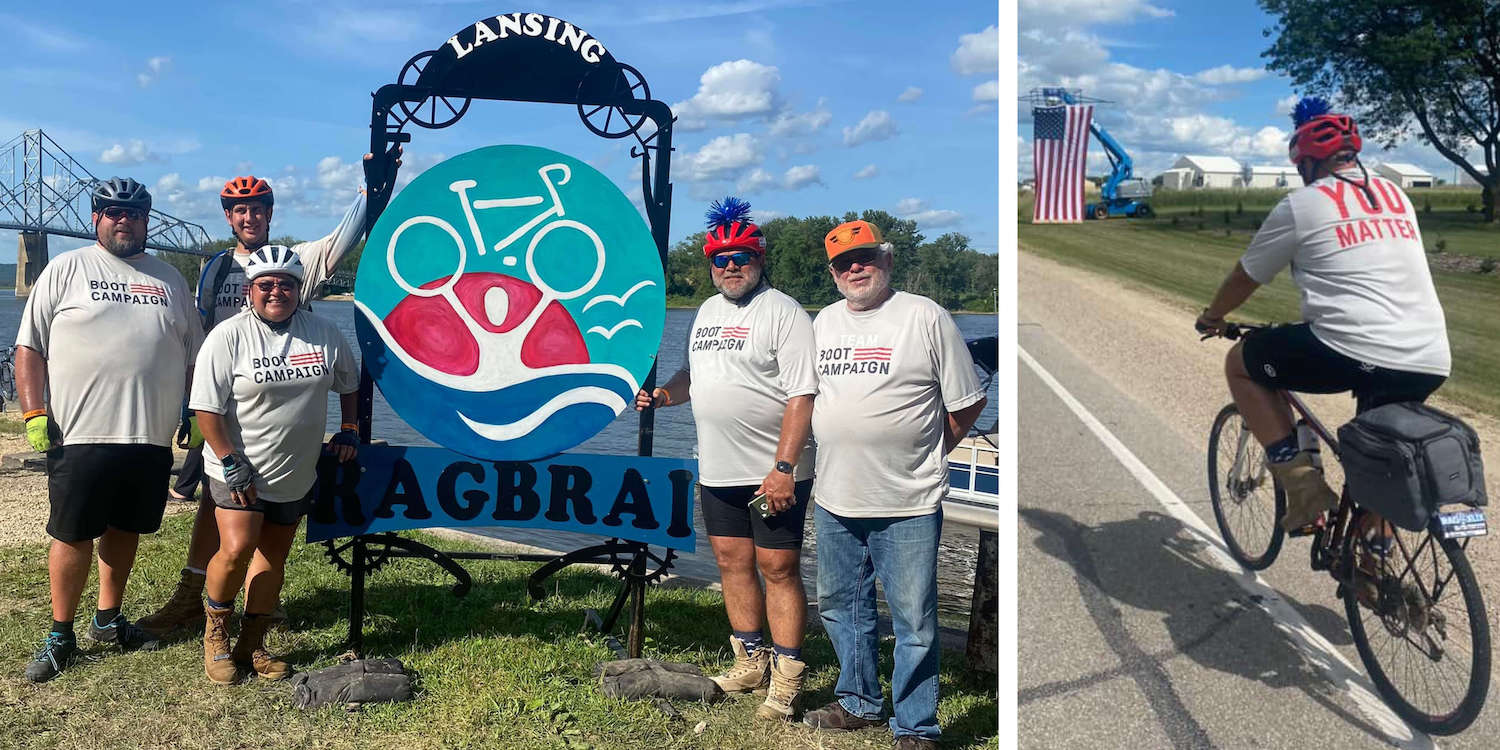 More than just a bike ride, the Register’s Annual Great Bicycle Ride Across Iowa – or RAGBRAI – is the oldest, largest and longest multi-day bicycle touring event in the world! The eight-day rolling festival of bicycles, music, food, camaraderie, and community began between a few friends in 1973 and has grown to become a staple event for recreational riders across the globe.

This year, we were excited to have a Boot Campaign team riding in an effort to raise support and awareness for our mission! Boot Campaign Veteran Ambassador, Steve Lucas, along with patriotic teammates, took to the pavement to ride the total 468 miles, which began on July 23 along Iowa’s western border on the Missouri River and ended on June 30 along the eastern border of the Mississippi River.

We caught up with Steve at the end of the nearly 500 mile trek to hear more about his experience and how their team was able to share Boot Campaign’s mission and the message of YOU MATTER along the journey.

What inspired you to sign up for the RAGBRAI?

I grew up in Iowa, so I was aware of the RAGBRAI and have family members who have completed it before. It’s been on my bucket list of things I’d like to do someday, so we decided why not do it this year?

Our team consisted of my parents, Steve and Joyce Lucas, who served as our transportation and logistics support during the 8-day ride, my wife Sarah, who also served in the military, and my family members Jesse, Tommy and Emma Brown along with their support team, Mandi and Klara. It was incredible to have my family together as a team to share in this journey while also spreading the mission of Boot Campaign and the message of YOU MATTER.

What was the most challenging part of the 8-day ride? What kept you going?

The most challenging part of the ride was honestly the unknown. Once you get to the top of a hill (of which there were many along the path) you start to see what’s up ahead of you – often more hills that you’ll have to climb.

It was much more demanding of a ride than I initially thought – both physically and mentally. It was warm (typically 80-90 degrees) and humid while riding on asphalt all day. We could have certainly trained and prepared much more than we did, but at the end of the day, I was constantly encouraged by my team – especially Sarah, who is just a machine! Even when it was hard, I knew I couldn’t quit for myself, my family, and for the mission and purpose we were riding for.

Your team jerseys had our YOU MATTER logo prominently on the back. How did that message resonate with other riders you came in contact with? 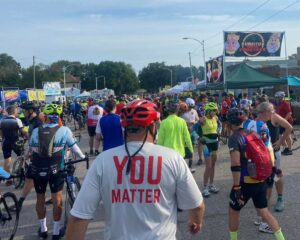 First off, there was so much camaraderie throughout the ride. With 20,000-30,000 people riding each day, we were constantly connecting with people as we were riding, at pit stops or in the communities we stayed in each night.

We connected with many riders and members of the communities we stayed – including many veterans – because they loved the message of YOU MATTER and wanted to talk about it. There were at least 100 people who rode by and said, “Hey – YOU matter!” after reading our shirts, and oftentimes, those people would find us at the next pit stop and ask about Boot Campaign and the message of YOU MATTER. It was amazing the support for suicide awareness and especially veteran suicide awareness.

Our team also handed out YOU MATTER stickers throughout the ride and to people we came in contact with. Some would share their stories, talk about their experience as a veteran or say, “Hey I know a veteran, can I give them a sticker to let them know they matter?” It was incredibly encouraging to hear the response people had to the message, and gave us a bigger purpose each day to keep riding, keep connecting with others and spread YOU MATTER at any and every moment.

What was the most surprising part of the ride?

There is a huge culture behind the biking world, and many people doing the RAGBRAI came from all over the world or have done these types of rides many times before. I rode on my mountain bike the entire way with my pack of essentials and wearing my Boot Campaign combat boots. It was surprising how many people made comments about the fact Sarah and I were riding in boots!

Our boots were lightweight and very comfortable, but any experienced rider would know it’s much easier to ride with clips and riding shoes. However we felt our boots added to the message we were making. Someone asked me “what’s with the boots?” and I would explain to them about Boot Campaign and also how you really can’t understand someone’s situation until you walk (or ride) a mile (or 468!) in their shoes. It was great to answer their questions of “why are you wearing those boots?” to help raise awareness for what Boot Campaign is doing for veterans and military families.

Were there any special moments along the ride?

It was incredible to connect with so many fellow veterans along the ride and in the towns we stayed. Four out of the seven nights our hosts were veterans – one a Korean War veteran, another a Cold War-era U.S. Marine Corps veteran, another a U.S. Army veteran who also happened to be the town’s Mayor.

We also had a very humbling experience when we got to one of the stops in Rockford, Iowa. We met some great people when we rolled into Rockford who knew Jon “J.T.” Tumilson and his family. JT was one of the Navy SEAL team members on the CH-47 Chinook helicopter – call sign Extortion 17 – that was shot down in Afghanistan on August 6, 2011. We were able to take time to visit his resting place to pay our respects. It was an honor and humbling experience to spend time there honoring one of our nation’s heroes who gave everything for our freedom.

How did it feel crossing the finish line?

The ending was pretty much all downhill, which was great but also you had to be careful in catching too much speed and monitoring the speed of those around you. Overall we were so exhausted, but when we got to the end, we forgot all about our exhaustion, how sore we were and how many miles we rode. 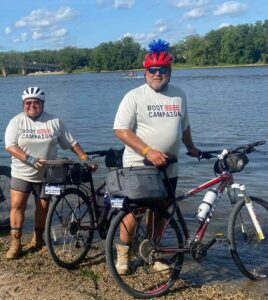 It was such a great feeling to look back and see how much we had accomplished. That feeling of accomplishment definitely changes your perspective at the end of the day and makes the struggles seem distant. We celebrated as a team by dipping our front tire in the Mississippi River – a tradition that all riders do upon completion.