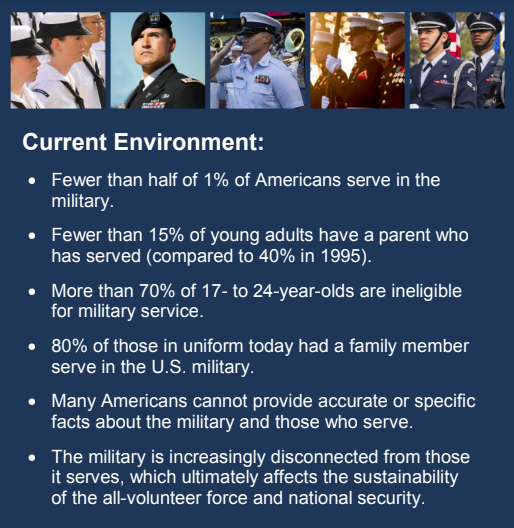 Why We Need To Live Laced Up

Last month, I shared these recent statistics provided by the Department of Defense with the Boot Campaign team and online via my personal social media accounts. It initiated a flurry of comments.

A gentleman on LinkedIn commented, “Blown away by these stats.”

One colleague said, “That last statement is embarrassing; do students not learn any of these elements in school now?”

The question was quickly followed by a response from another employee who has high school student kids saying, “My own 15-year-old said to me, ‘but, Mom, we are not even in war.’”

She continued, “We have been in a war all their life but they have no actual comprehension of it. Somehow there is still a disconnect.”

The question to me is why is there a disconnect between those who serve and those who enjoy the freedom afforded to them? Is it because our youth now weren’t alive during 9/11 to witness the horror of being attacked on American soil in one of the most densely populated cities in America? Is it because our self-absorbed, selfie-obsessed social media culture is so focused on the individual that we fail to look up, see the world around us and acknowledge those who are living a life different than our own?

As a country, we have to commit to do our part in educating our youth of the value of military service, and to be more balanced in what we share about active duty troops and veterans. What makes headlines is often news of active duty troops that are the tip of the spear of all who have been engaged in combat and conflict consistently for the last 17 years as part of our nation’s longest war. For them, all of America should certainly be grateful.

So, too, should we express our thanks and show our support for the millions who make military careers out of the jobs that don’t make the the front page of the paper or evening news. Time in service for some, or military occupational specialty as it’s known by those who join the Armed Forces, includes IT technicians and teachers, logistical experts and engineers, dentists and doctors, pilots and police, cooks, comptrollers and chaplains.

No matter their job in the military, get to know them. Ask active duty service members and veterans about their service; why they joined the Armed Forces, the lessons they learned that they still carry with them and the friends they made. Ask them about their families who serve right along side them — enduring deployments, often worrying for their loved ones’ safety while holding down the home front. We owe it to all members of the Armed Forces and the more than 22 million veterans who call America home, to live laced up in support of their service and sacrifice while they wear the uniform and when they take it off and return to civilian life.

So lace up your boots, and help us change the statement shared by Department of Defense that said, “Many Americans cannot provide accurate or specific facts about the military and those who serve.” The men and women of the U.S. Armed Forces are our fellow Americans. They are mothers, fathers, wives, husbands, brothers, sisters and friends.

Let’s live laced up for them.

Meet Our 2019 Board of Directors