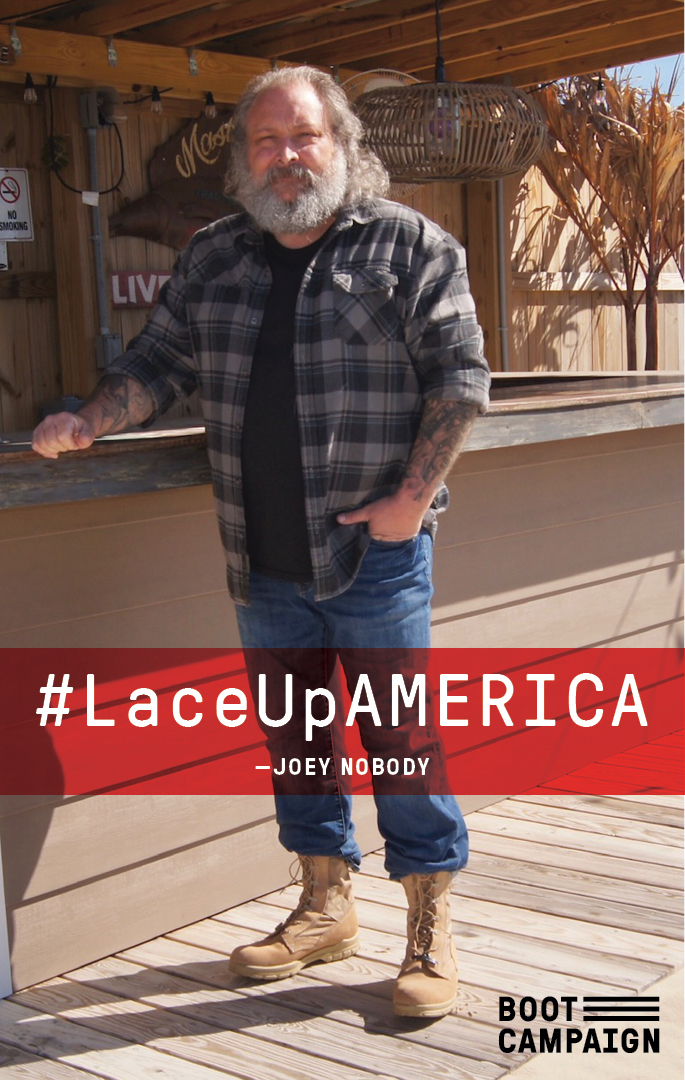 Boot Campaign CEO caught up with tattoo artist Joey Nobody who has inked many of our military’s finest. Joey has been involved with Boot Campaign for nearly a decade and recently designed a set of the just released Boot Campaign quarantine coloring pages. See why he’s still standing firm with his Boot Campaign boots laced up to support those who serve!

How did you first learn about Boot Campaign?

I was thrust into the world of tattooing at a young age; quickly I went from working on outlaw bikers and rockstars to tattooing a different type of “rockstar” — America’s military forces, specifically the Special Warfare Units. Sitting on the sidelines, I watched many organizations start up and do so much good for our servicemen and women. Boot Campaign happened to be the first that I witnessed rise to the occasion.

What do you want the American public to know about those who serve?

I would like for society to realize the sacrifices made on a daily basis by those who serve and their families. The sacrifice is pushed aside in some minds; our lives go as well as our daily routines. A lot is taken for granted, while the lives of military families halt, trudge thru and continue to sacrifice for us to have this free existence.

What is your hope for the future in how America supports the military community?

My parents and grandparents both served and instilled in me values that are too often forgotten nowadays. Whether you agree or not what is going on in the world or the administration, we as a community, as a country, need to support our servicemen and women.

I was born into an immigrated family; they became citizens and served proudly. My family  showed me that this country could do amazing things with the help of its people. My family played a part, as did many others, and I like to think I have played a part in some way as well. I’m a proud American and hope that we as communities continue to give back to the country that offers us so much.

Why do you believe in the mission of Boot Campaign and our dedication to providing individualized care for invisible wounds of war?

I have seen first hand the trauma of war — both the physical and in more recent times, the emotional. Boot Campaign has truly dedicated itself in finding the aid and assistance to our warriors that they desperately need, and continues to help in finding new ways to do so.