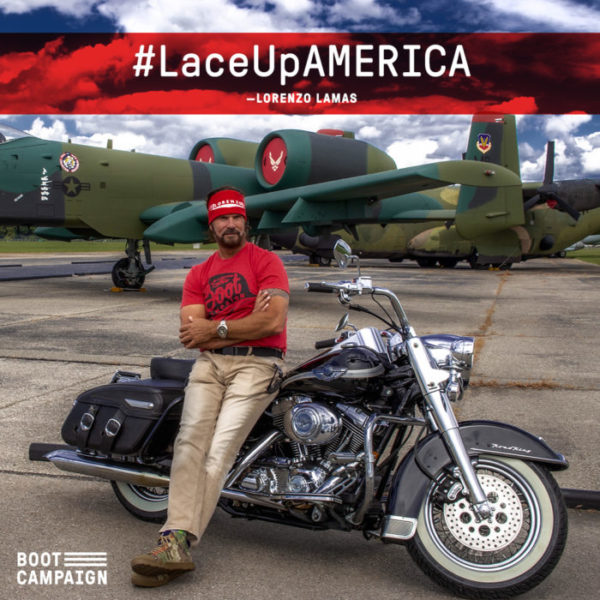 Looking back over the last 10 years has been a fun adventure for all of us at Boot Campaign. We each have moments as part of our decade-long history of serving veterans that stand-out both in memories and people who have been part. Lorenzo Lamas comes to mind very quickly. He not only laced up Boot Campaign boots in our early years, but chose Boot Campaign as his featured charity during his appearance on The Apprentice. Lorenzo has been a repeat customer, purchasing a variety of boots and apparel over the years to show his support for Boot Campaign. When he recently ordered a pair of our 10-Year-Anniversary boots by Altama, we checked in with him to talk about his involvement with Boot Campaign and why he remains a steadfast supporter not only of our organization but the military community as a whole.

How did you first learn about Boot Campaign?

I was introduced to the Boot Campaign by my friend Ron Starrantino, while choosing a charity to benefit from my appearance on ‘Celebrity Apprentice’ for NBC TV. 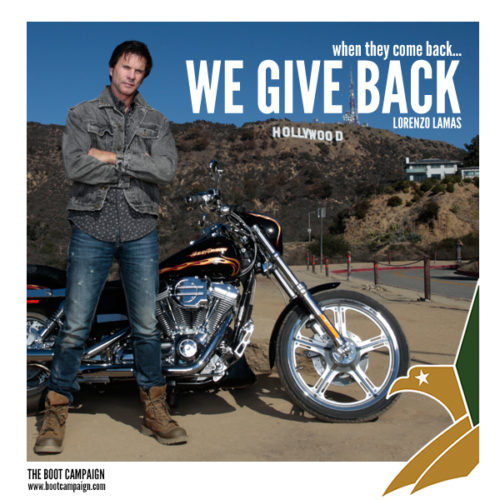 What interested you about the mission and message of the organization so much so that you have chosen to support it?

I have been associated with many charities throughout my career, among them St. Judes, Muscular Dystrophy Association and World Children’s Transplant Fund. The criteria for me has always been the amount of real help and ensuring actual money reaches the folks who need it. Many of my classmates and family members have served in the Armed Forces, and I believe that veterans deserve the highest amount of respect and support. Many leave their families to serve for months on end, and I think the efforts that the Boot Campaign make to help these people are noble and effective.

What do you hope that the American public learns about Boot Campaign and more importantly the military community?

I hope that people can be made aware of the Boot Campaign through events and promotion and I’m happy to lend my support to help.

Why is it so important to give back when veterans come back from service?

I feel that it is my duty as a celebrity to raise awareness for important causes. As a group, celebrities have recognizable names and can do so much to help charities like the Boot Campaign. We must remember the sacrifices that our military makes and the families of those individuals as well. Without our military protecting democracy worldwide, we would not be able to enjoy the freedoms that America has to offer.