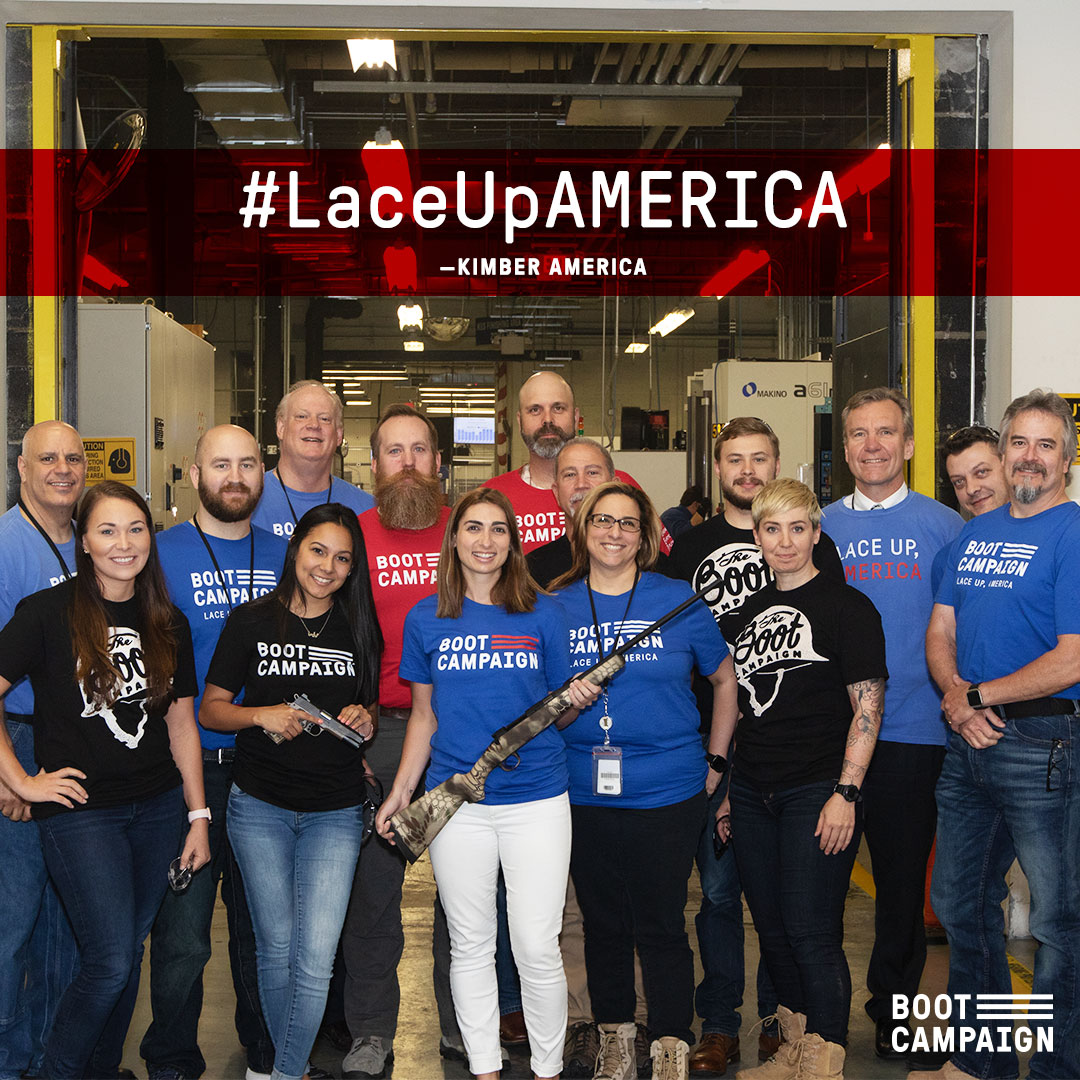 Kimber Manufacturing has been a proud supporter of Boot Campaign since 2015. Earlier this year the well-known firearms company introduced two weapons to its product line. The lightweight Hunter rifle and Hero Custom 1911 pistol, both adorned with the Boot Campaign logo, benefit Boot Campaign’s mission and programs.

“We fully support Boot Campaign in their efforts to help empower our nation’s veterans to successfully transition out of military service and into new lives as civilians,” said Winslow Potter, Kimber’s Director of Product Marketing. “We are proud to be spreading awareness of Boot Campaign’s positive work across our industry, with our customers and beyond.”

Since 2015 the Kimber partnership had helped raise more than $150,000 for Boot Campaign. The launch of the co-branded products has already increased that amount significantly and garnered national attention.

“We are delighted to see our relationship with Kimber blossom,” said Shelly Kirkland, Boot Campaign CEO. “The response we have seen to the Kimber rifle and pistol that support Boot Campaign lets us know that there is a great desire for Kimber customers to give back to those who have served in the military. We are deeply grateful to the company and their patrons.”

At the 2018 Shot Show, largest trade show of its kind in the world, Daniel Shaw of GunMag Warehouse described Kimber’s partnership with Boot Campaign as “helping veterans and making some cool guns in the process.”

Rachel Maloney, Creative Services Manager with Kimber Manufacturing elaborated on the partnership to Shaw. “We’re really excited to be working with this fantastic organization. They do a lot of really great things helping everybody coming back who have served. It’s the least that we can all do to participate in this. I know that [Boot Campaign] started with a bunch of really cool professional ladies that started wearing combat boots around to start that conversation and really get everybody up to speed on really helping out the people who have given so much for us to be able to do everything that we want to in this country. So as a way to help honor that we have two new guns in line.”

The Hero Custom 1911 pistol, available in .45 caliber, is complete with the Boot Campaign logo engraved in tan on the top strap and a forward facing fighting American flag on the black slide flats. It is equipped with fiber optic sights, Kryptek® Highlander grips, a desert tan frame and – originating from the gun’s military history – it has a lanyard loop in the mainspring housing. The Hunter rifle has Boot Campaign engraving on the barrel, carries the Kryptek® Highlander pattern and comes in seven different calibers.

Kimber manufactures its firearms in the United States and is best known for its 1911 pistol that is widely used by law enforcement and military.

Digital, Spiritual and Cutting-Edge Medicine Has U.S. Army Veteran and Movie Star Back On The Road to Recovery