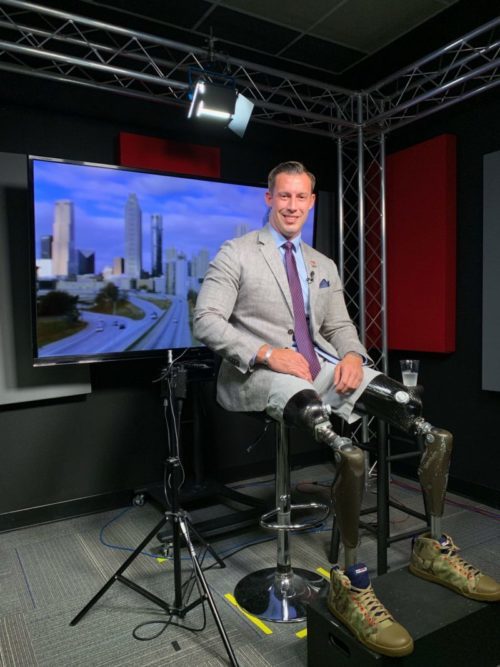 Shelly: Remind me. How were you first connected to Boot Campaign?

Joey: In 2011, I was living in Washington, DC finishing up my recovery, working on Capitol Hill and attending classes at Georgetown. I heard Joe Nichols on the radio talking about an organization that wanted to inspire patriotism in all Americans; since I was passionate about the subject myself, I wrote in to Boot Campaign’s website. From there, the Boot Campaign team invited me to the very first boot ride… you could say it was the start of a nearly decade-long partnership.

Shelly: Why were you drawn to the Boot Campaign message?

Joey: I like the celebratory nature of the Boot Campaign. The goal then and now was not only about helping military families, but encouraging patriotism. When I first got involved, Boot Campaign gave me a platform to say thank you to patriotic Americans who had helped me recover from my injuries.

Shelly: What is your greatest Boot Campaign memory?

Joey: Gosh; that’s a difficult question to answer, but two come to mind. When I was still living in Washington, DC, I wanted to create a way for Americans to hear more stories from veterans who served but also demonstrate their love for our country. Inspired by the scene in Forrest Gump on the National Mall where thousands of people were protesting the Vietnam War, I wanted to get thousands of people on those same steps of the Lincoln Memorial to demonstrate their support for our troops. So we did just that by inviting civilians to do as many push-ups as possible in 90 seconds while hearing from military veterans themselves.

My second favorite memory is so vivid to me; I remember looking around the room at Boot Campaign’s very first veteran ambassador retreat and feeling satisfied and so fulfilled because so many veterans were getting the opportunity to give back and continue their service in the civilian sector.

Shelly: What does patriotism mean to you?

Joey: Patriotism, to me, is about the love we have for each other as Americans regardless of how we look, how we pray or how we vote. For me, being an American is enough to care about each other.

Shelly: What is your hope for the future in how America supports the military community?

Joey: The best way to support the military community is to be active in your local community, our political system and for all Americans to have expectations of veterans when they come home. We should hope, expect and encourage veterans to be contributing members of society after their service and to not get stuck in a box of what they used to do in the military.

Shelly: Since Boot Campaign was born because of boots, we have to know: Who is your favorite boot shoot and who would you want to see in boots that hasn’t yet laced up a pair?

Joey: My personal favorite from when I worked at Boot Campaign might be Smokey Robinson. He is such a genuine guy. When Smokey first laced up his boots, I only spent 10 minutes with him. But two years later at a major event not affiliated with Boot Campaign, he recognized me from across the room, came over and gave me a hug. When people hear the mission of Boot Campaign, believe in it and recall it years later – that’s the goal!

I’d love to see Chris Pratt lace up some Boot Campaign boots. He’s as genuine as anyone in Hollywood. Chris, let’s make it happen!