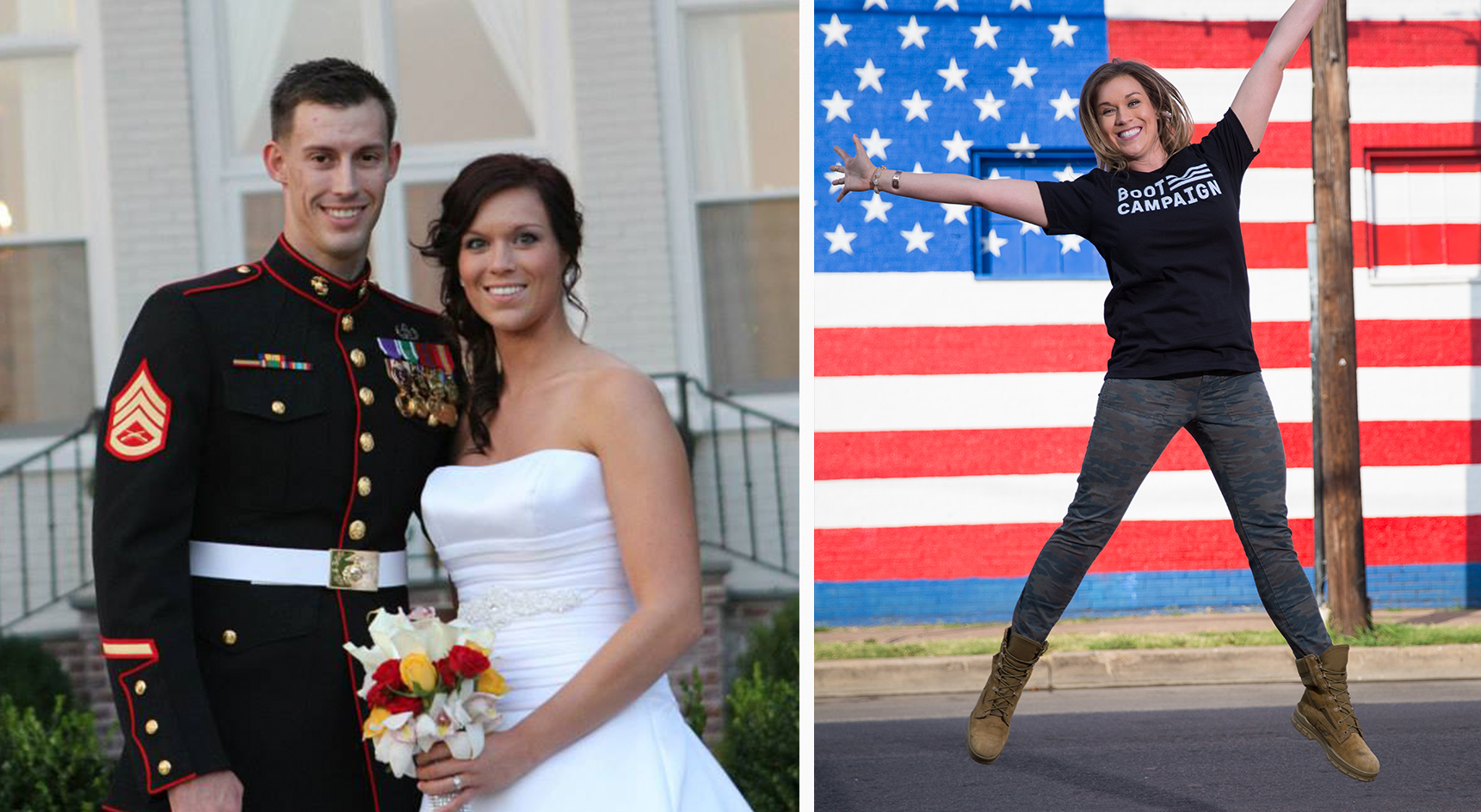 This article originally featured in the April 2019 issue of Homeland Magazine and is republished with permission.

After earning a bachelor’s degree in early childhood education in 2010 from her hometown Dalton State College, it never occurred to Meg Garrison that two years later she would forge a new path where she would be spending her life, 24/7, serving the military community. But that is exactly the life that this selfless Georgia native chose for herself after she came to the aid of an injured childhood friend in his time of need.

Meg met her husband-to-be at Southeast High School in Dalton in 2003, and upon graduation, she headed off to college and he was off to a career in the Marines. Meg and Joey were not in a relationship on Aug. 6, 2010 when Joey stepped on an improvised explosive device (IED) in Afghanistan, resulting in the loss of both of his legs above the knee and suffered severe damage to his right forearm and both wrists.

After learning of the injury, Meg found herself in Washington D.C. and began helping Joey battle through two grueling years of recovery at Walter Reed National Military Medical Center. The couple were married in the nation’s capital at Marine Corps Barracks 8th & I in 2012, and since then she has had a fast and furious education into the military community ever since.

“Because Joey and I were not in a relationship at the time of his injury I didn’t have any experience with the military community or lifestyle,” recalls Jones. “Throughout his recovery, I was not only quickly learning how to take care of an amputee but also learning the lifestyle and structure of the military. Thankfully, I had fellow EOD technician wives Caroll Tarter and Sarah Lucas to help mentor and guide me through that process. Without their friendship and guidance, I would have really struggled.”

According to her husband Joey, it was a phone call he made seeking inspiration that brought the two back together again – a call he will be forever thankful that Meg answered.

“When I got injured Meg was little more than an ex-girlfriend; we were barely exploring a friendship,” remembers Joey, a frequent national television commentator on U.S. news and world events. “I called her from Germany two days after my injury on a whim that she might come visit me and cheer me up. She came a few days later and has been by my side for the past nine years. The love and patience she’s provided our partnership is beyond words and she is truly my rock.”

Even though her grandfather Lloyd Keith was a U.S. Army World War II veteran and her father Allan Garrison was a first lieutenant and “Huey” utility helicopter pilot for the Army in Vietnam, Jones says she never quite understood the military life her “Papa” and “Dad” experienced as details were not shared with her during her youth.

“My dad didn’t really talk about serving until after Joey got hurt,” Jones explains. “He told us it was just a part of his past and seemed so long ago that it didn’t seem relevant to talk much about. Joey’s injury opened up a whole side of my dad that none of us, even my mom, knew existed. We now have a much better understanding and have actually seen footage that he filmed during his tour in Vietnam from back in 1972.”

While she always has been 100-percent committed to the new direction of her future, the transition did not come as easily or smoothly as some might assume.

“As the wife of a Marine, it’s hard to find civilian friends who can understand and relate to the experiences and challenges that we face every day as a family and that our spouses have been through,” she confides. “Many times, our friends who do ‘get it’ are across the country, so creating long-distance support systems is critical.”

Being supportive to her step-son Joseph also was high on her new list of priorities, especially after majoring in early childhood education and beginning her career at a small non-profit organization developing materials for and running an initiative for children. Although it has had its share of ups and downs, she treasures her relationship with Joseph and considers it a blessing.

“Joseph is Joey’s miniature doppelgänger, and he brings so much joy to our lives,” Jones beams. “Joey and I are always looking for new and exciting things to do as a family with Joseph and we cherish our time with him.

“The most challenging time was last year when Joseph shared that another third-grade child was making fun of his dad for not having legs,” she explains. “Thankfully, his school has a wonderful support system and sat down all the students in his classroom to discuss the issue and allow Joseph to explain to his classmates what happened to his dad.”

She says the situation also reminded her of just how special and strong military children can be in general, no matter what uncontrollable circumstances come their way.

“For me, the incident at school with Joseph was a very eye-opening moment to see how resilient he was and how well he handled the situation,” Jones reports. “Military kids are some of the most dynamic people I’ve ever met.

“Their ability to adapt to new situations and settings and to be comfortable constantly meeting new people is something to be admired by all,” she continues. “Secondly, the incident reminded me of how important the work is that I’m a part of with Boot Campaign, which is sharing the message of service, sacrifice, and patriotism of military families nationwide.”

The Jones family first learned about Boot Campaign from hearing a 2011 XM radio interview with Joe Nichols, a country music artist and Boot Campaign celebrity ambassador. Eventually, both Joey and Meg ended up working for Boot Campaign full time. Joey ultimately served as chief operating officer until leaving for other ventures in 2017, and Meg currently serves as programs director.

“Boot Campaign’s staff was one the first organizations to treat Joey and I like we were just ‘normal’ people post-injury,” admits Jones. “They didn’t look at us and see a couple trying to ‘find their new normal,’ which is a widely used term in the injured service member community. To Boot Campaign we were just Joey and Meg, and they drew us in because there was genuine patriotism radiating from their staff and supporters.”

As programs director for Boot Campaign, Jones is on the frontline of the organization’s veteran assistance and awareness programs. She ensures candidates receive treatment as part of Boot Campaign’s revolutionary health and wellness program, arranges for veterans’ families to receive gifts and assistance during the holidays through the Santa Boots program, and encourages the public to “Lace Up America!” by purchasing Boot Campaign combat boots.

“For me, it’s an honor to be able to alleviate some of the stress and frustration that many veterans experience in dealing with their healthcare and the holidays,” says Jones. “Each time a veteran shares a message that the services we have provided were better than they’ve ever experienced, I know I’m doing the right thing and making a difference. It’s the least I can do to make a part of their lives easier during or post service.”

Adds her husband Joey: “As the daughter of a Vietnam veteran and the spouse of a combat amputee, Meg truly embodies the virtues we hold dear in this country: love, hope and compassion. I love my wife selfishly, yet I’m proud to selflessly share her with such an amazing cause.”

Jones is unapologetically proud of the organization she represents and is confident she and her fellow colleagues will continue to ignite patriotism in the spirit of providing life-improving programs for veterans and military families throughout the country.

“Boot Campaign is like no other military non-profit that myself as a military wife has ever experienced,” Jones says. “Our staff, supporters, and partners truly care about the well-being of those who serve and have served.

“If you are looking for help or resources, don’t be nervous to reach out and seek support,” reminds Jones. “Taking care of ‘YOU’ is the most important thing you can do for your family and yourself.”