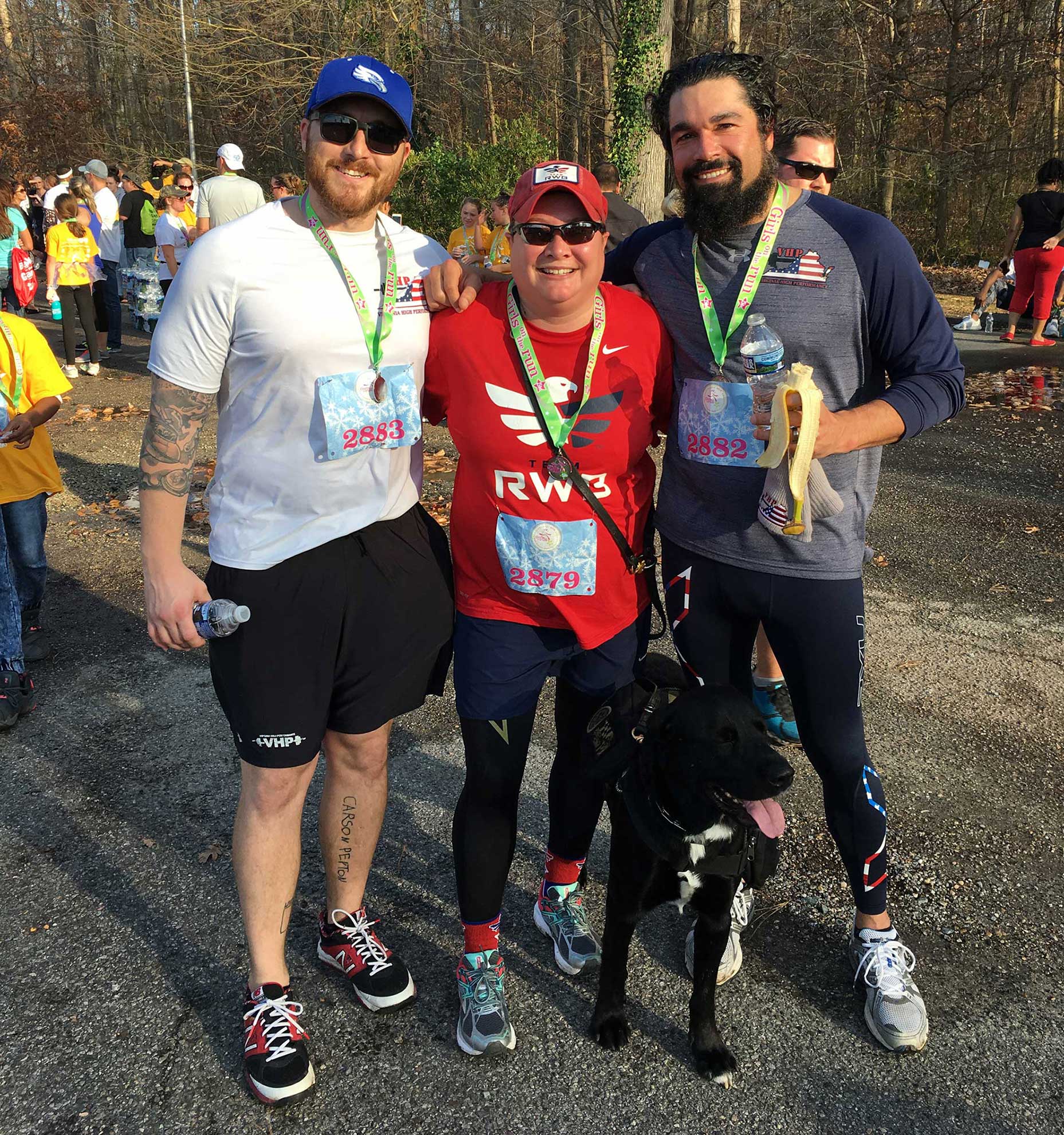 Blaze of Glory Comes to the Aid of U.S. Army & Coast Guard Veteran

This article originally featured in the August 2017 issue of Homeland magazine and republished with permission.

As far back as the mid-1700s, Dog has been recognized as man’s best friend.

Frederick, King of Prussia (1740-86) is widely credited with coining the phrase when he referred to one of his Italian Greyhounds as his “best friend.”

According to MilitaryHistoryNow.com, archeologists suspect humans have been using dogs in warfare since the animals were first domesticated more than 15,000 years ago.

Nowadays militaries around the globe train dogs as messengers, sentries and trackers, as well as bomb, weapon and drug detectors and enemy attackers.

The military community also recognizes that “man’s best friends” can be invaluable as service dogs, helping many of America’s heroes cope with the gamut of mental and physical disabilities they have suffered while selflessly protecting our freedom.

It is this Florida-based service dog organization, along with Texas-based military non-profit Boot Campaign, that recently came to the rescue of civilian and military police officer Megan Karr, who completed nearly 10 years of military service in 2012 with a variety of life-numbing physical and emotional issues related to PTSD, TBI and MST.

A U.S. Army Corporal and a Maritime Enforcement Petty Officer Third Class in the U.S. Coast Guard, Karr began her military career as an Army Reservist with the 352nd Military Police Company out of Rockville, Md., before being detached and reassigned to U.S. Army 367th MP CO for deployment to Guantanamo Bay, Cuba (2004-2005). She then transferred to the Coast Guard Reserves and finished her military contract in Sector Southeast New England as Port Security and Maritime Enforcement.

While her military police career was complete May 31, 2012, she always anticipated continuing her 12-year law enforcement career as a civilian. But when an opportunity came to transition into a stay-at-home mother instead for her two young daughters, she jumped at it. The transition to staying home, however, turned out to be blessing as well as a curse.

She enjoyed being there for her daughters, but physical and mental challenges she was trying to manage as a military sexual trauma survivor began to take their toll. She became reclusive, gained 60-70 pounds, began heavily smoking cigarettes and self-medicating with alcohol. She also experienced depression, heightened anxiety, panic attacks and even a rare type of stroke – Reversible Cerebral Vasoconstriction Syndrome – where the arteries of her brain developed blood vessel spasms leading to constriction.

“I was not in a good healthy place to say the least,” recalls the Silver Spring, Md. native and Louisville, Ky. resident. “That wasn’t me. I’d never experienced anxiety or panic attacks before. I used to play on five different soccer teams at once, playing five or six times a week. I went from being crazy active to not moving much at all.”

To try and turn things around, she became involved with the local chapter of Team Red, White and Blue, dedicated to helping veterans connect to their community through physical and social activity. That’s when the dominos started to fall in Karr’s favor.

“I was volunteering at a Team Red, White and Blue event where I met my good friend Clay Stretch, who had a service dog through K9s for Warriors,” remembers Karr. “He was telling me about how much his dog saved his life and helped him get out again, and encouraged me to apply to get my own. So that’s what I did.

“I applied and it’s a very thorough process,” she adds, “like a 20-page application, hour and a half phone interview and more interviews on site, all to make sure they partner you with the right dog.”

After the screening process comes the “reveal,” when the K9s staff takes the veteran back to the kennels to be introduced to their dog. A three-week training camp is next to help vets bond with their dog and feel more comfortable in public places. That is how Karr was first united with her black Newfoundland/Labrador retriever mix named Blaze.

“I’ve had Blaze for just over a year now and it’s a perfect match,” reports Karr. “He helps me in many different ways because he is really calm, really chill. He’s able to alert me when my headaches are of a more serious nature, and when I need to take fast-acting meds. He wakes me from night terrors and helps me with anxiety and PTSD when I’m out in public. In short, it is thanks to Blaze that I feel comfortable enough leaving the house and doing things I hadn’t been able to do in years.”

Because of her new-found confidence with Blaze, Karr was willing to venture out of town to speak publicly on behalf of K9s for Warriors last September. That decision proved to be another fortuitous opportunity for Karr that she never saw coming.

“I was invited to speak at a golf tournament in Nashville, Tennessee that was a fundraiser for different veteran organizations,” Karr explains. “One of them was K9s for Warriors, who asked me to bring Blaze and represent them because the person who was scheduled had to cancel. The other organization was Boot Campaign, and that’s when I met Morgan Luttrell.”

Luttrell is the U.S. Navy Lieutenant (Ret.) who founded Boot Campaign’s cutting-edge ReBOOT program that is revolutionizing how veterans receive recovery assistance for PTSD and related brain injuries. When Luttrell heard Karr share her story, he immediately recognized she would be a perfect candidate to “ReBOOT.”

“I’d never heard of Boot Campaign before, but I knew who Morgan Luttrell was,” says Karr. “Here is this awesome dude, and he pulled me aside at the fundraiser and talked to me about my situation. He encouraged me to apply, and followed up with me right away to make sure I did.

“After a few days, he emailed in a recommendation for me and said, ‘I’m going to get you in,’ and he did it,” she continues. “It’s just been life changing from that point on. What he did for me was huge, just amazing!”

A few weeks later, Karr was admitted to Boot Campaign’s fully funded ReBOOT program and was off in mid-October to the Center for BrainHealth in Dallas. She spent two weeks getting a complete diagnostic workup of her body and brain under the care of neurologist Dr. John Hart. She then traveled to Virginia Beach, Va., for four more weeks of intense physical testing, training and strict nutrition at Virginia High Performance (VHP) to get her body in the best condition possible.

It was this world-class physical and mental wellness program that diagnosed exactly what was causing her such debilitating difficulties, giving her the missing puzzle pieces to help her better understand her situation and how to get back on the road to recovery.

“I had many injuries and issues that I’d been living with for over 10 years that went undiagnosed, and through the ReBOOT program I was able to not only get a diagnosis but also learn how to better manage those issues,” reveals Karr. “That answered a lot of questions.”

But it didn’t answer all her questions. Women currently represent 17 percent of the U.S. Military but, according to PTSD United, 71 percent of these female military personnel develop PTSD due to sexual assault within the ranks. Those statistics did not go unnoticed by her Center for BrainHealth team. “The neurologist was a little shocked that the stroke I had was PTSD related,” she continues. “But once they discovered I had a TBI from my MST attack, then Dr. Hart was able to put all the pieces of the puzzle together. They identified all these things I had never been able to get diagnosed. That’s what Dallas did for me.”

In Virginia Beach, Karr’s care was directed by VHP founders and retired Navy SEALS Jeff Nichols and Alex Oliver, who are at the forefront of concussion treatment. Along with her trainer Vernon Griffith, VHP helped her find out how to combat her spinal stenosis and other ailments by designing a physical therapy, diet and exercise regimen specifically for her. They also made sure she was tasked to overcome a challenge before completing the program.

“Vernon surprised me a couple of weeks into my training when he said they wanted everyone to have a milestone to reach before they leave, and he figured out what mine was,” reflects Karr. “He said, ‘you’re going to run a 5K.’ I just laughed at him, but he was serious. Between the stretching, strength training and conditioning, he got me ready.

“I hadn’t run a 5K in 10 years, and I never imagined I’d be able to run one non-stop with only a few weeks of training,” she adds, “but I was able to run the whole thing. It wasn’t pretty, it wasn’t comfortable, but I never stopped running.

“The 5K host organization Girls On The Run also allowed Blaze to run it with me,” she smiles. “They thought it was really cool to have a service dog run it, and they gave Blaze a medal, too!”

Having those “cool” friends to share life’s little achievements with is what makes them so memorable, even if they are four-legged friends like Megan’s Blaze of glory!